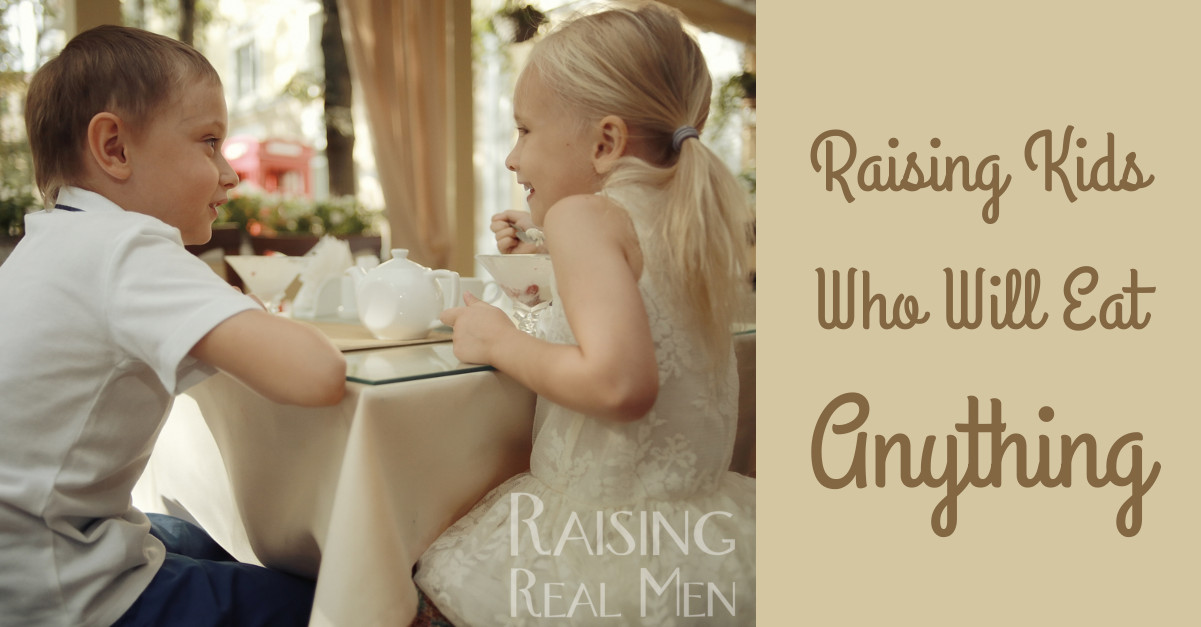 Posted by Hal and Melanie Young in Civilization, Family Life, How to Be a Father, How to Be a Mother, Man Food, Parenting
41shares

One of our goals in raising our children was to help them learn not to be picky eaters. We’d both seen the extra work, turmoil, and frustration in a family when one of the children was picky, only to see those same children grow up to eat things they’d rejected at home. Hearing tales from missionary friends about the real offense being picky can cause when you’re trying to reach another culture sealed it for us.

That’s been a good thing. We travel all over the place speaking and are often guests at meals. We’d be in trouble if the children didn’t eat pretty much whatever they’re fed, because sometimes there’s nothing else available!  How do we manage it? Here are some things you can try:

Keep your own mouth shut. Hal’s a pretty picky eater. He raises an eyebrow at most raw fruits and veggies and even some cooked ones, too. Melanie has a few things she doesn’t like much, either. We decided early just not to talk about it. Whether we like it or not, we serve a small portion on our plates and push it around a bit if we can’t eat it. And we never complain about those foods. Sure, the children figure it out after awhile, but usually by that time, they love to eat it!

Hal remembers once we got a flat of reduced price cans that included a can of black olives. One of our boys asked what they were. Hal didn’t care for them, but he put some enthusiasm into his voice and said, “They’re black olives! Want to try some?” He opened the can and served them to him. That little boy is a dad himself now, but he still loves black olives. You’ve got to set an example.

Hunger is the best sauce. Want to introduce a new food? Or, reintroduce a rejected one? Make dinner late one night and serve the new food as an appetizer. It’s amazing what looks appealing when you are really hungry!

We love fried okra, but one of our little ones decided it was “yucky.” A few weeks later, I made fried okra a little past the time we’d regularly have dinner, put it on the table and told them to have at it, then started making dinner. Before long, she snuck one. A few minutes later she was eating them happily and she loves them to this day. I loved hearing her ask for “fwied okwa.” Who could resist that?

No griping at the table. Anyone who complains about the food at our table has to stand up behind their chair or bench and watch the others eat for awhile. This is strong medicine for a young boy, but we believe it’s critical to be able to be gracious about what you’ve been provided for the sake of your host and your testimony. We’ve seen adults gripe about what they’ve been served and it isn’t pretty! In the home, the attitude of older children will infect the younger ones – don’t let it!

Make sure they try things. In our house, the rule is that you have to try the number of bites that you are years old (which assumes someone older has more self control). That means they really taste it and eat enough of it that they discover it won’t kill them, either. 🙂

But, don’t make too big a deal about food. In our house, you don’t have to clean your plate and I don’t pay attention to what you eat or don’t eat as long as you are gracious and don’t complain and are a good example to your siblings. You don’t get seconds, though, until you’ve eaten what you’ve been served. Making dinner time into a huge power struggle is counter-productive.

Don’t panic if they don’t eat. My theory is that if they don’t eat lunch, then they’ll really enjoy dinner. We’re not doing a bunch of snacks and between meal treats for a child who won’t eat, though. Stay calm and be parental and they’ll figure it out eventually.

Marketing will swing the day. If you act thrilled about a new food, work to make it palatable (ranch dressing, cheese, seasoning), and serve it when they’re hungry, you might be surprised by what they’ll eat. I’ve seen our guys eat cold, boiled chicken feet in China, even though they taste just like you might imagine – like rubber bands dipped in chicken broth. Why is it important? Because our hosts are more open to what we’re saying when we share a meal with them. 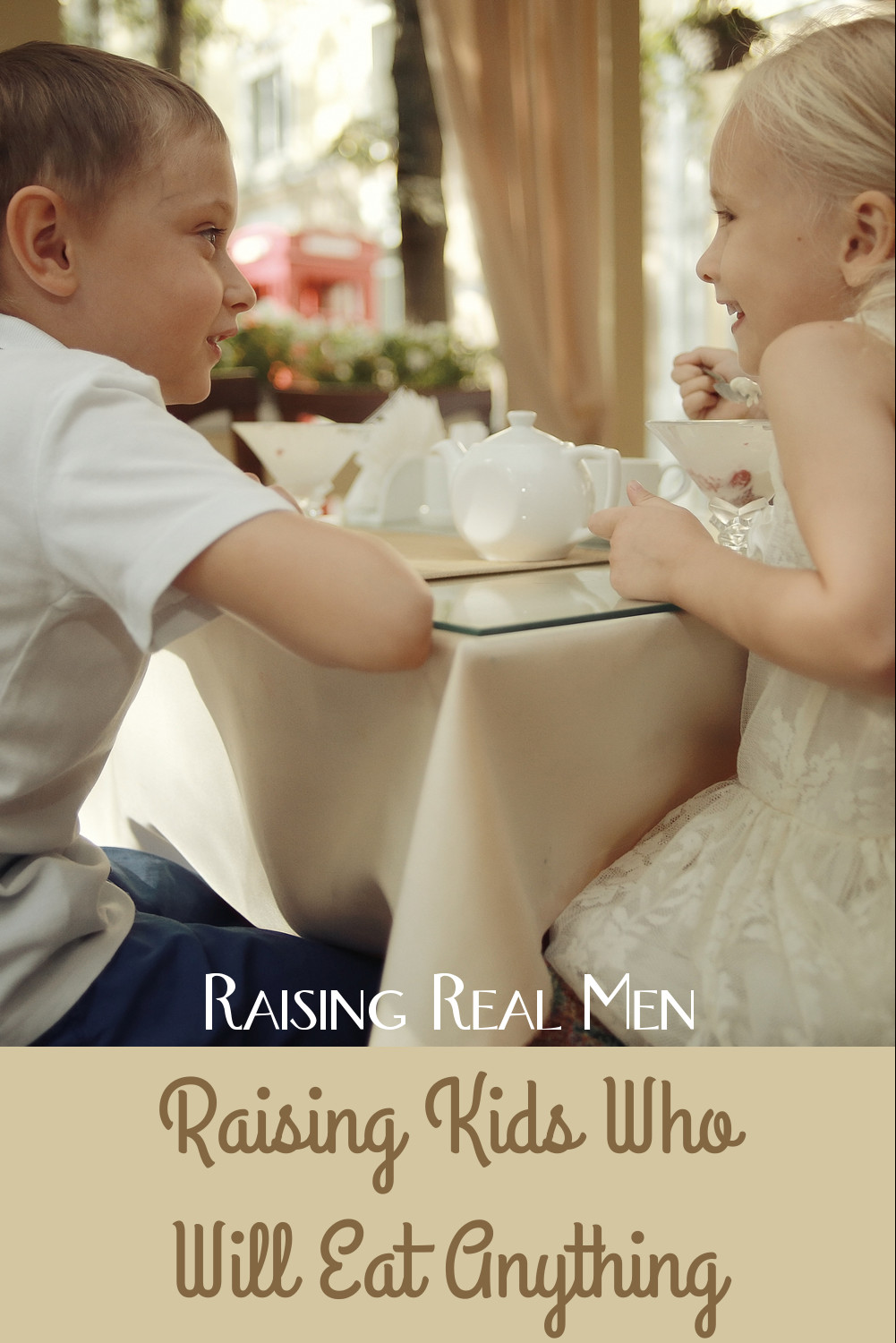 Start early, if you can. The sooner you start this, the better your children will respond. We find we have the most trouble around 3 or 4 years old when they get old enough to really start talking about what they want or don’t want. If we stand firm for a few weeks at that age, the battles pretty much go away entirely.

You can accommodate a few preferences, but don’t be ruled by their whims. We allow everyone to have *one* thing they don’t like and I’ll accommodate that in our house, but they have to be prepared to eat it if it’s served somewhere else. For example, one of our sons really doesn’t like mayonnaise. I’ll leave it off his sandwiches, but he knows not to pitch a fit if we’re served a platter of subs with it when we speak at a church. If you just can’t stomach something, you find a reason not to eat, “Thank you, I’ll get something later, I need to go ahead and get us set up,” but you are always kind.

Be an example. What if I just don’t want to eat it or it’s not on my diet? Generally, we shouldn’t allow our preferences to interfere in fellowship or in regarding others more highly than ourselves. I can put together a meal that is as close to my diet as possible from what’s available, or avoid the foods I don’t care for, but I should try to keep anyone from noticing if I don’t want my child showing out when he doesn’t want to eat something. What we do in moderation, they’ll do in excess.

Make adjustments to deal with real issues – allergies, sensory issues, or food intolerances. Those are different and most people understand. Let your host know in advance, offer help meeting the need, or provide food yourself, but always teach your children how to be gracious about it. “Thank you so much! Those look wonderful! I’m so sorry, but I have a peanut allergy. Don’t worry about me, though. I brought a safe snack. I really appreciate your thoughtfulness.”

For more on raising younger boys, join us for Boyhood Boot Camp, a LIVE webinar series just for parents of boys under nine years old! It’s all the things we wish we’d known when our six boys were that age. It’s so much fun! Our next session starts soon and we’d love to have you join us! Click here to find out more.

Let’s enjoy a meal together sometime!