iGen: Understanding the Next Generation 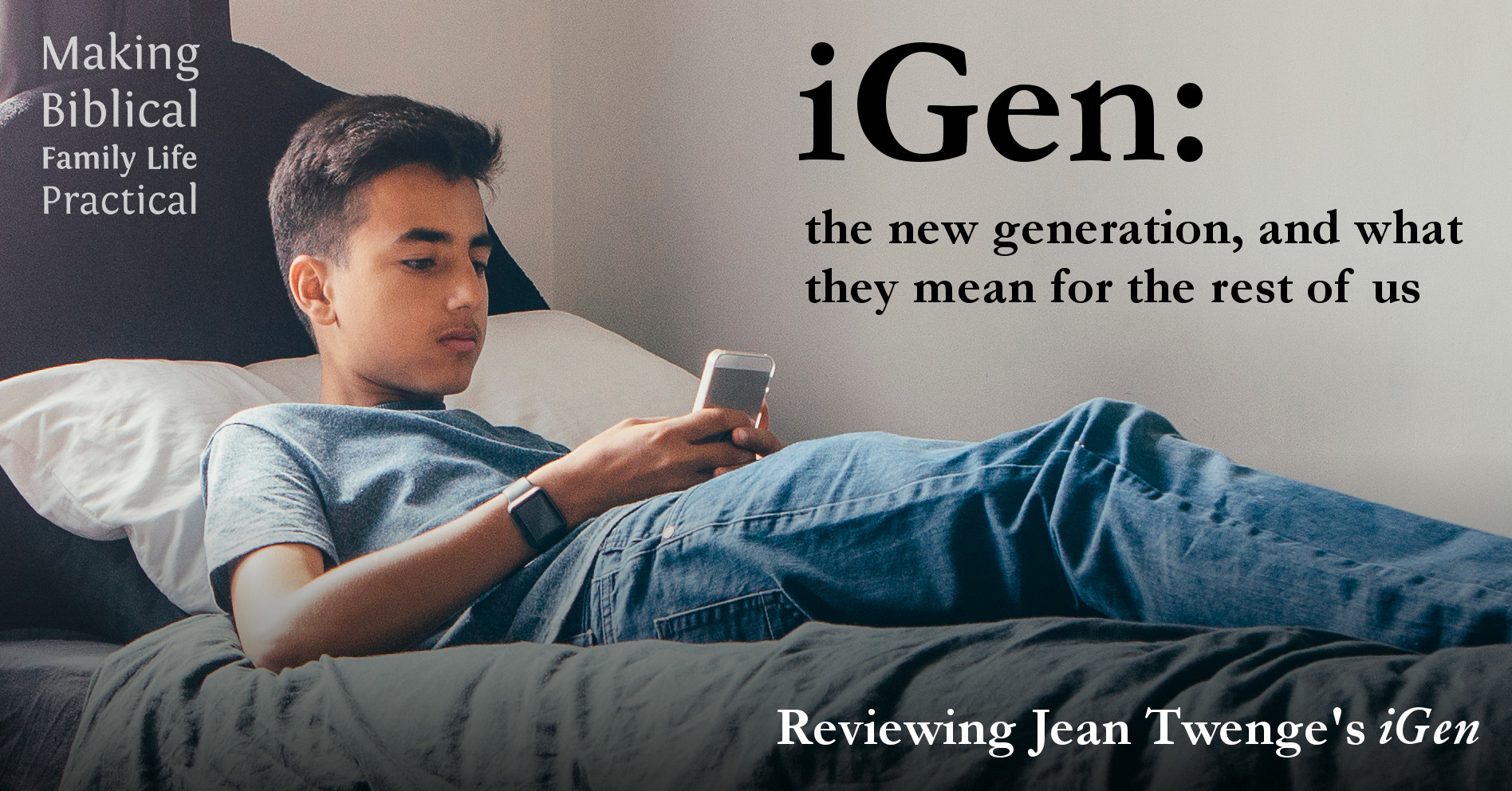 This post contains referral links. Thank you for using them!

Jean Twenge, iGen: Why Today’s Super-Connected Kids Are Growing Up Less Rebellious, More Tolerant, Less Happy–and Completely Unprepared for Adulthood* (*and What That Means for the Rest of Us) (New York: Atria Books, 2017)

Cultural changes tend to be gradual, incremental things, says Jean Twenge, a professor of psychology who studies generational differences. “I had grown accustomed to line graphs of trends that looked like hills slowly growing into peaks, with cultural change making its mark after a measured rollout that started with a few young people and swelled to many,” she writes.

But around 2012, she noticed trends which fell off the cliff, or suddenly skyrocketed. “I’d never seen anything like it,” she said, in all her study of data back to the 1930s. Abrupt change was something new.

Millennials, welcome the next generation. Some have tagged it Generation Z; Twenge calls it iGen.

This is the group born in 1995 and later – currently 23 and younger, the newest crop of college graduates. The fundamental shift she traces comes back to 2011, the first year a majority of Americans owned smart phones. The next year is when the cultural trends erupted.

Why Should We Care?

Many of us, as intentional Christian parents, aren’t following trends. We’re working on timeless truths and Creation mandates, and often we’re making countercultural choices about our family life and our parenting decisions. “As for me and my house, we will serve the Lord,” we affirm with Joshua (Joshua 24:15)

But while we’re not of the world, we are most definitely in that world. These are the new employees at our office. They are the new teachers at the local schools. In a couple of years, they will be the youth pastors and team coaches of our children and the graduate students teaching our older kids. And in fact, this is the “world” that our children are entering. They’ll need to understand it in order to work with it, coexist with it, and evangelize it. It’s their generation, even if they’re not marching in lock step with it.

Twenge makes a very good case that the digital revolution is responsible for the sudden shift on numerous fronts. She uses data from long-term surveys of high school students and college freshmen in order to compare apples to apples – how did Baby Boomers feel when they were 18, rather than comparing today’s high school senior to his 58-year-old boss.

The author shows how the ability to carry the Internet in your pocket and sleep with it under your pillow has completely changed how young people use their time and build their relationships and world view. For instance, by many measures iGen’ers are growing up more slowly. Today’s high school seniors are significantly less likely to have a driver’s license, to have ever had an after-school or summer job, to have ever gone out on a date, or even to spend any free time away from their parents. Hanging out with friends at the mall? Don’t look for it.

Yes, but. Fundamentally, Twenge says, this generation is risk-averse. They are avoiding substance abuse and promiscuity not because they’re immoral (large numbers of these students are turning away from religion, in fact) but because they’re not safe.

And their definition of “safe” has expanded. The average high school senior is spending six hours a day on new media, including two hours on the Internet and more than two hours texting … every day. Their friendships are largely focused on social media and text messaging, which leads to two problems: a lag in real social skills (and awkwardness which leads to a social fearfulness), and immersion in the unforgiving world of messaging. They don’t have schoolyard fights like their parents or grandparents might have experienced; instead, they savage and bully one another online.

That, Twenge explains, is the source of the campus hysteria over controversial speakers or even simple disagreement. To this generation, words are the same as physical violence, and this slow-maturing generation demands college and university officials protect them. Raised by helicopter parents, these students have embraced childhood into their twenties. They are terribly, terribly fearful. 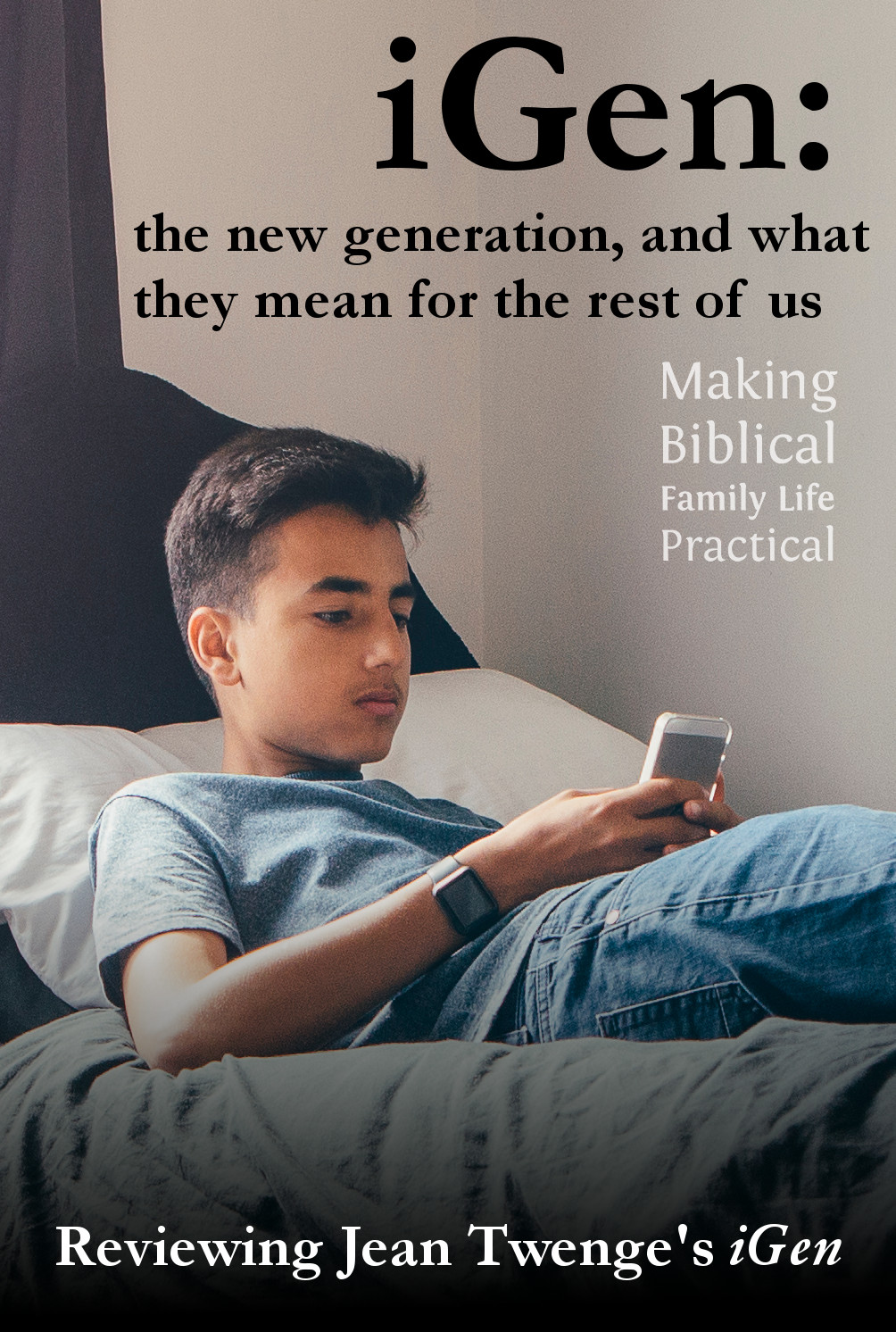 What Should We Do About It?

Twenge is careful to explain that demographic statistics aren’t meant to describe every member of a generation—far from it. But they do explain a culture that individuals need to understand and navigate.

She shares data which clearly show a correlation between time spent on social media and the sharp rise in unhappiness, depression, and even suicide among young people. Her very first recommendation is to hold off giving kids a cell phone until they absolutely need it – and then, give them a flip phone, not an Internet capable smart phone. If they want to be on social media, get an account on your desktop, not on a phone; that way they can coordinate with their friends but not spend hour after hour connected to the beast. Mid-teens are better able to handle the pressure of social media.

Get them moving toward independence, she recommends. Push them to get their driver’s license. Encourage them to spent real-life time with friends, not hanging out online. Help them find a job and earn money of their own to manage. All of these are sound advice.

And as a Christian, I would add this – we need to train our kids to stand on God’s Word in spite of the culture around them. This generation is showing signs of accelerating the Millennials’ rejection of religion, and while they may be having less sexual experimentation in real life, they are embracing the sexual revolution internally – widespread acceptance of pornography, the normalization of transgenderism and same-sex marriage, and abortion on demand. This puts a generation on a collision course with Biblical truth.

At the same time, they are increasingly intolerant of opinions that differ from theirs, and hysteria and hatred are replacing simple opposition to viewpoints they dislike. Overreaction is the order of the day.

Our children will need to be truly “wise as serpents and harmless as doves” in the face of very hostile peers (Matthew 10:16) This is not the first time the church has faced widespread cultural rejection, but it may come as a surprise to believers who grew up in an America which, though not uniformly Christian, had been framed by a biblical worldview and schooled in the virtue of tolerance. iGen is about to change that, but Christ’s last word to His disciples should be our hope – “Lo, I am with you always, even to the end of the age.” (Matthew 28:20)