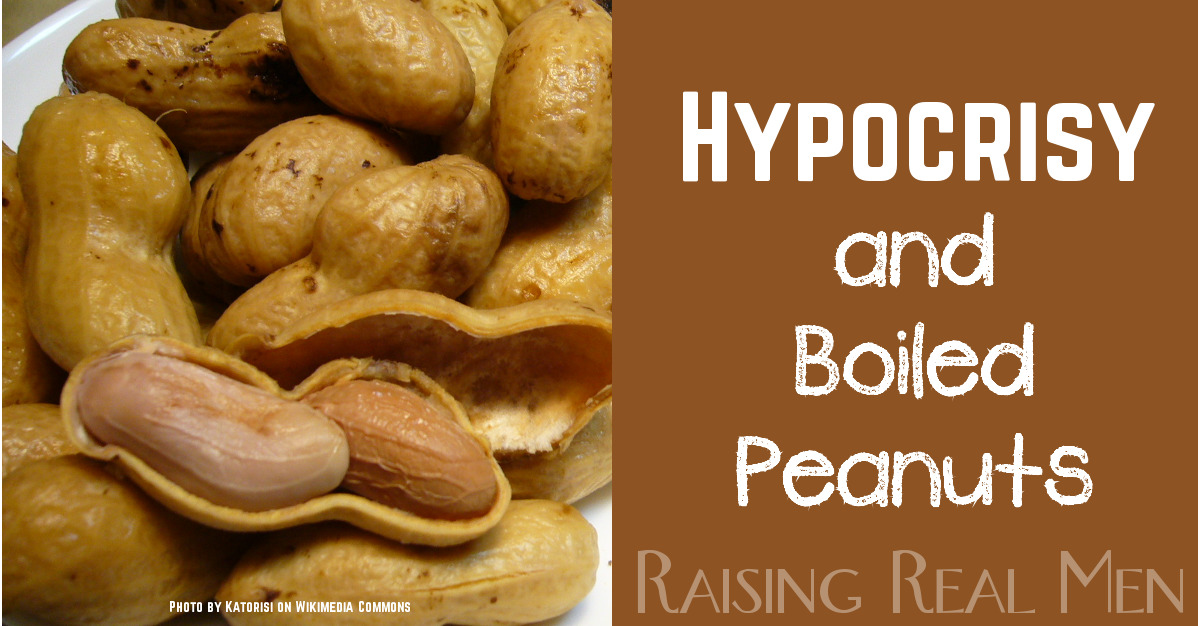 Have you ever had an embarrassing parenting moment? Yep, just had one. To be fair, my kids thought it was funny, but I was pretty embarrassed.

Hal and I decided before we even had kids that we would try to help our kids avoid being picky eaters. So, they hear us say some things over and over:

Except I’ve always hated peanuts. That wouldn’t change. Nope. Not ever. Don’t talk to me about peanuts. Don’t offer me peanut butter. Yuck. Ick. Bleah.

Then the other day, one of my adult sons was noshing on some boiled peanuts. Yes, that’s a thing. At least in South Carolina, it’s a thing. It’s a thing everywhere in South Carolina. I remember the newstand in my grandparent’s hometown sold them. Every farmer’s market has someone boiling them. Gas station? There’s a crockpot of hot boiled peanuts. There’s even a cauldron of them at the front at Wal-Mart. It’s kind of an everyman’s snack around here.

“Hey Mom, you ought to try these,” he said. “They really don’t taste anything like peanuts usually do.”

I looked around and saw all those kids I’d encouraged not to be picky looking at me … and well…gulp.

“Okay. I’ll try one, but you’ve got to shell it for me.” I just couldn’t face touching that shell – it  meant “This is yucky” to me.

Then it was confession time. “I love them! I really do! Why didn’t you tell me they tasted like pinto beans?”

I’ve had them several times since and I really, really love them. And I feel really, really stupid. REALLY stupid. Here I’ve missed a treat for decades that I could have been enjoying. Because I was too pig-headed to try it.

That’s exactly what we’ve been trying to teach our children not to do. For the most part, we’ve succeeded. Folks are amazed at the things our kids will eat. Owners of ethnic restaurants give our little kids free desserts when they watch 6- and 8-year-olds happily gobbling up octopus, tandoori chicken, vindaloo, crawfish. Hooray, our kids aren’t picky!

Kids are more likely to listen to us when we practice what we preach, though. When we don’t … it’s hypocrisy. And kids have really strong hypocrisy meters. They want to know their leaders are worthy of leading. When we tell them to do as we say, not as we do, we tempt them to rebellion.

So what do you do if you’ve blown it? If you’ve sinned and your kids know it? You model for your kids what a Christian does when they’ve done wrong. You confess your sin and ask for forgiveness.

What if it doesn’t rise to that level? What if you didn’t really sin, you just weren’t a great example? The same thing. Admit it, apologize, and do better.

Our kids know we’re not perfect. They already know we’re sinners. Let’s make sure we point them to the only cure for sin – the blood of Jesus Christ, who died so that we could be forgiven.

That’s really the whole point of parenting — to point our children to the One who made them and died for them. And that is worth a bit of embarrassment any day of the week!

I think I’ll go snack on some boiled peanuts.