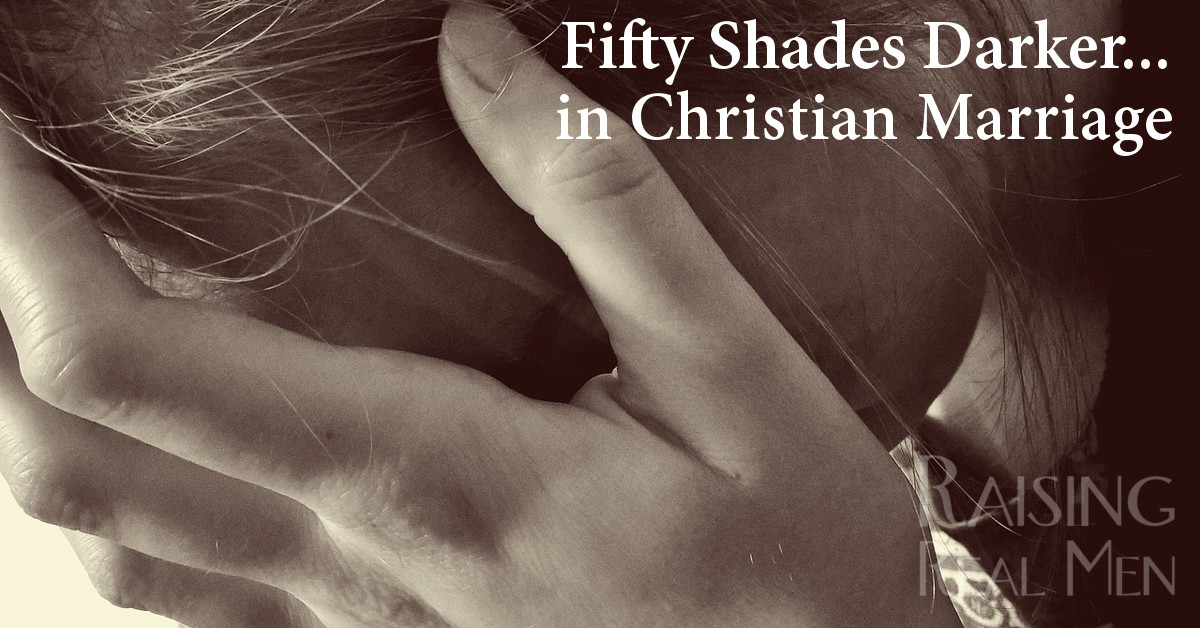 Warning: Adult subject matter, may be disturbing to abuse victims.

Adrienne* shook with heavy, harsh sobs. Then her eyes flashed with anger, “I couldn’t believe he would do that to me!” She described haltingly how her husband had forced her into a sexual act that she was ashamed to even talk about. Then she began to cry softly like a little girl, “He wanted to do it again and again. I told him it felt like a serrated knife! I told him I hurt so badly I could barely walk, that I was injured.” She wailed like a lost soul, “He didn’t care! He’s supposed to love me. He’s supposed to protect me. He doesn’t care! ”

“You should go to the elders of church. Talk to your pastor. Maybe they can talk some sense into him. You need help,” we told her.

Is your blood boiling? Ours was. This is a true story. In fact, we keep hearing stories like this. Women who are being asked to submit to humiliation, restraint, pain. They are horrified, disgusted, even wounded with lasting damage, but find little sympathy in the men who promised to cherish them. Some of them have even come to accept this as normal and defend it.

What on earth is happening here?

Now that kind of sexuality is going mainstream. If enough people fall into the same sin, pretty soon it starts to look normal.

On Valentine’s Day weekend, the time our culture sets apart to celebrate love, Fifty Shades Darker, the sequel to Fifty Shades of Gray, is being released. This is the story of rich playboy Christian Gray and his domination and physical abuse of Anastasia Steele, a vulnerable younger woman. In Darker, Anastasia goes back to the abuser she left at the end of the first movie, which, though it might be realistic, is not a good message for battered women.

That’s this year’s “romantic” movie for Valentine’s Day and we see women talking on social media about going to see it. Christian women. 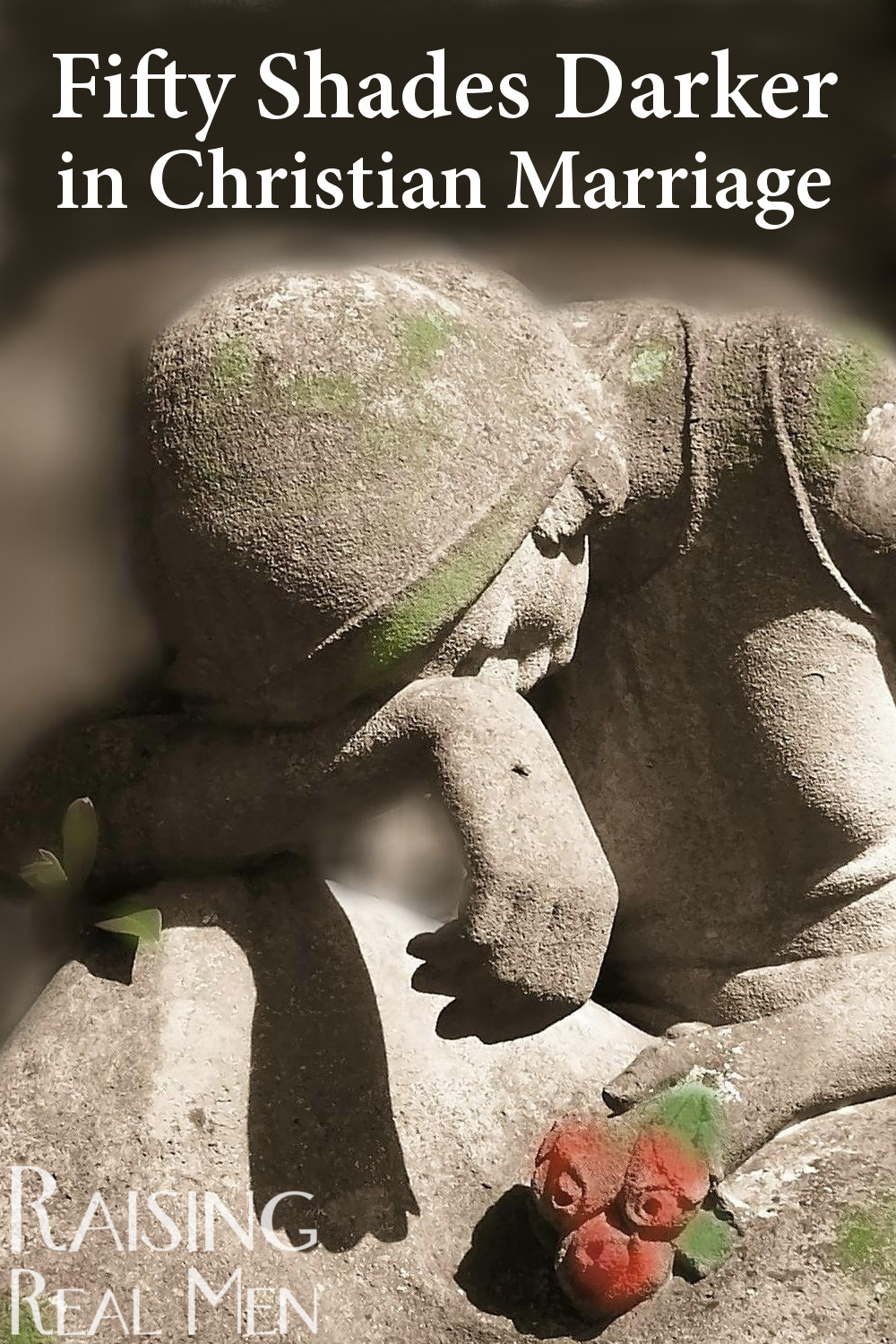 But is sexual bondage, pain, and humiliation appropriate for a Christian to pursue — even in marriage? Some argue that any sexuality is fine for a married couple, but when we look at what God expects of us, we can’t agree.

Ephesians 5 tells us that marriage is meant to reflect the relationship between Christ and His bride, the church. Does Jesus entertain Himself by taking the church prisoner, abusing her, and degrading her? Does He brutalize His bride for His own excitement? No, He doesn’t.

Ephesians 5:25 says that husbands should love their wives “just as Christ also loved the church and gave Himself for her.” Christ’s example is one of gentleness, service, and most of all, willingness to give up His life for His bride. He denied Himself. Christ doesn’t rape His church, and He doesn’t fantasize and pretend that, either.

Galatians 5:22-23 describes the life which Christians should pursue and experience. But the fruit of the Spirit is love, joy, peace, patience, kindness, goodness, faithfulness, gentleness, self-control; against such things there is no law. And those who belong to Christ Jesus have crucified the flesh with its passions and desires. Galatians 5:22-23

The fruits of the Spirit should be seen in our marriage. Even our sexuality should be subject to the Holy Spirit.

Where is the patience, kindness, gentleness, and self-control in the “Fifty Shades” kind of “love”?

Let nothing be done through selfish ambition or conceit, but in lowliness of mind let each esteem others better than himself. Let each of you look out not only for his own interests, but also for the interests of others. Philippians 2:3-4

Think about that verse as it applies in the bedroom. Surely, causing pain and humiliation for your beloved has no place in the romance of a believer.

On the other hand, a godly sexual relationship is not boring, it’s incredibly fulfilling. When we truly consider our mate more highly than we do ourselves, we are both trying to please one another. That’s more fun, more joyful than any sick fantasy of domination.

There’s a human toll to the normalization of perversion. Women who only want to be treated with kindness by their lovers are accused of being frigid or rebellious. They suffer pain and injury in the relationship that is supposed to keep them safe and secure. They feel betrayed by their providers and protectors. And sometimes, even their church leaders are complicit.

Is this pleasing to God? Certainly not!

Woe to those who call evil good, and good evil;
Who put darkness for light, and light for darkness;
Who put bitter for sweet, and sweet for bitter! Isaiah 5:20

There is a reason this lustful fantasy is described in its own title as “shaded” and “darkness.”

Jesus said, in John 3:19, that “men loved darkness rather than light, because their deeds were evil.”

This is evil, folks. Don’t believe it is anything else.

Don’t encourage it, don’t partake of it. Get help and get out of this kind of sin if you are living in it. And if you are a victim, you do not have to submit to this. You are made in the image of God and your body is the temple of the Holy Spirit. Get help.

Our newest book, Love, Honor, and Virtue: Gaining or Regaining a Biblical Attitude toward Sexuality, is for young men in their teens and twenties. It’s due to be released in just a few weeks — preorder now to get it as soon as possible.

My Beloved and My Friend: How to be Married to Your Best Friend Without Changing Spouses, 2015 Christian Small Publishers Book of the Year, addresses these challenges in marriage and gives encouragement and help to overcome them. Or, you could join us for our marriage retreat, Come Away Weekend, for some real romance!

Protect your sons from heading down this path. Get some kind of accountability on every internet capable device in your home. The one our family uses (affiliate link coming) is Covenant Eyes.

And you can find more resources about healthy sexuality here.