Q&A: My 11yo Has Horrible Manners!

A reader asks, “I have been struggling with something that I’m not sure how to fix it our 11 year old boy is very very stubborn.

I almost feel like he does it for the attention or he just doesn’t care. At the dinner table he will eat with his hands burp without saying excuse me eat really messy where stuff getting all over the place not caring to clean it up and chewing with his mouth open not saying please or thank you with out being reminded too, just has bad table manners, manners period. We will remind him to close his mouth etc things like that and he’ll say I know I know but a second later he’s doing it again when he was younger he had amazing table manners. 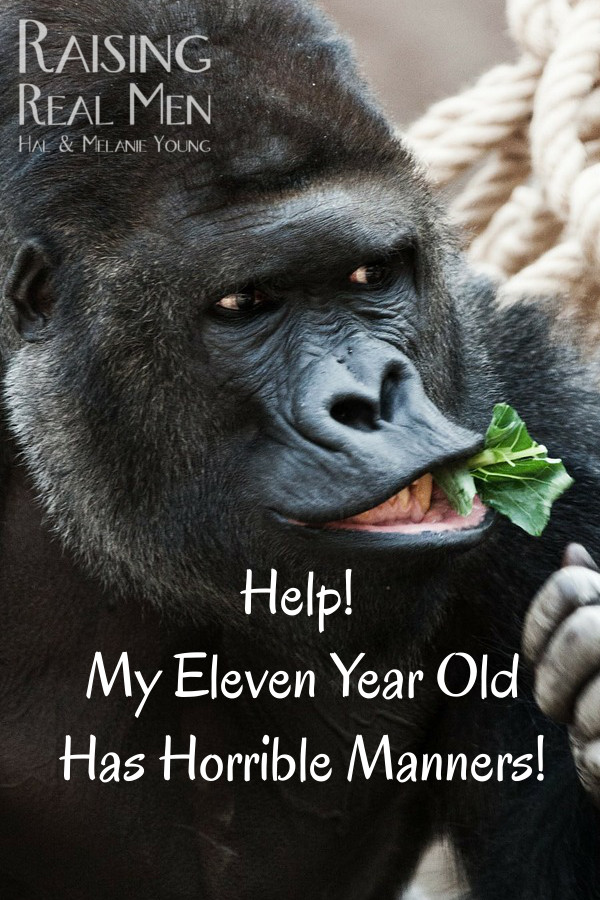 My husband’s getting frustrated because we took him to my in-laws for dinner yesterday we had a discussion with him before we went in about his table manners and he says I know I know ,we go in there and have issues again. It embarrasses us because my in-laws make comments of how that’s not allowed at their house but we don’t allow it either he’s just doing it. Its so frustrating and I’m trying to handle this the right way any advice on this would be great.”

There’s nothing like kids to keep you humble, is there?

We see three issues here and they each need a little different focus.

First, the grandparents. We’ve found ourselves in the same uncomfortable situation. In fact, it happened this morning! A child who definitely knows better will act like they’ve had no training at all in front of his or her very proper, Southern lady grandmother. Arrggghhh! That is so embarrassing! At this point, humility is probably the best course, saying something like, “No, we don’t allow it, either, and we’re working on it. Today is not a good day, though, is it? How did you handle things like this when we were growing up? What about when we were in public?” Getting them thinking back is likely to remind them that all children do this kind of thing at some time or another and even if it doesn’t, it shows you know what is expected and you’re trying — and allows them to be the experts! 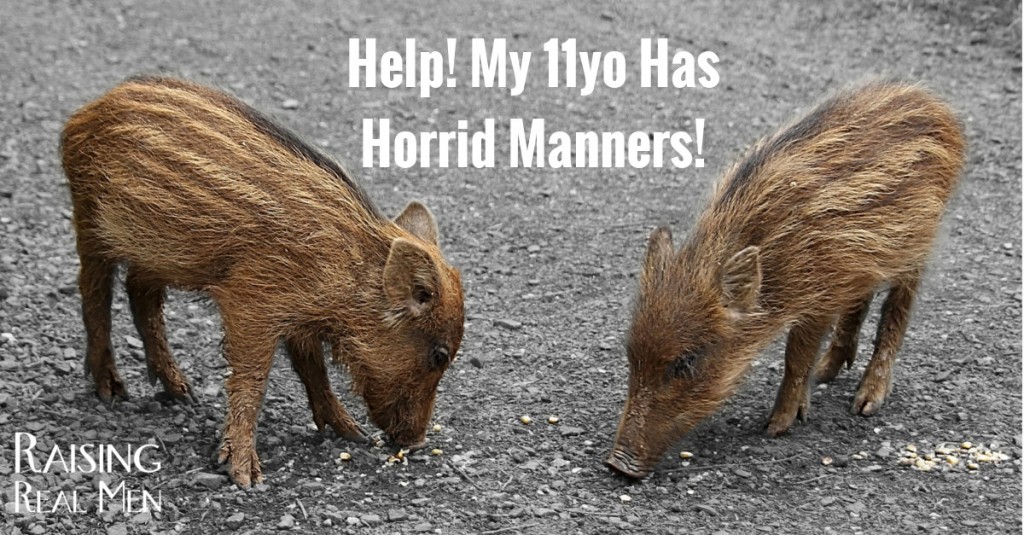 You’ve also got to keep working on the manners, even though sometimes it feels fruitless. When our guys were ill-mannered and a quiet reminder didn’t help, we’d ask them to stand behind their chairs for a time. They had to stand there, quiet, until we told them to sit down. It is *very* hard for a boy that age to watch other people eat when they’re hungry, so that was very motivational! I would also make sure he cleaned up his mess after every single meal until it got better. When kids are responsible for cleaning up, making a mess isn’t as much fun.
The third issue is one you may not realize because we didn’t when our oldest was that age. When we hear about an eleven year old that can’t focus on what he’s doing and acts like he didn’t hear you, we know what’s going on — the first stages of puberty!

When the hormones start flowing, the brain starts changing. During the time it’s remodeling, kids are distracted, addled, forgetful, and just downright exasperating, sometimes! They genuinely can’t help it, though, and it will get better! Hard as it is, we parents have to be patient and merciful with them during this stage. It’s easy to break your relationship with them by losing your temper and getting harsh when they really don’t have much control over it at all.

You can learn more about how to handle this age in a godly way that protects your relationship without ignoring sin in our online class for parents of preteens: Boot Camp 9-12. It’s one of the most popular things we do!

This is a frustating age, situation, and even topic. Teaching manners to boys isn’t easy! That’s why we spent a whole chapter on it in our book, Raising Real Men, and why we called the second half of the book, Civilization for the Rough!