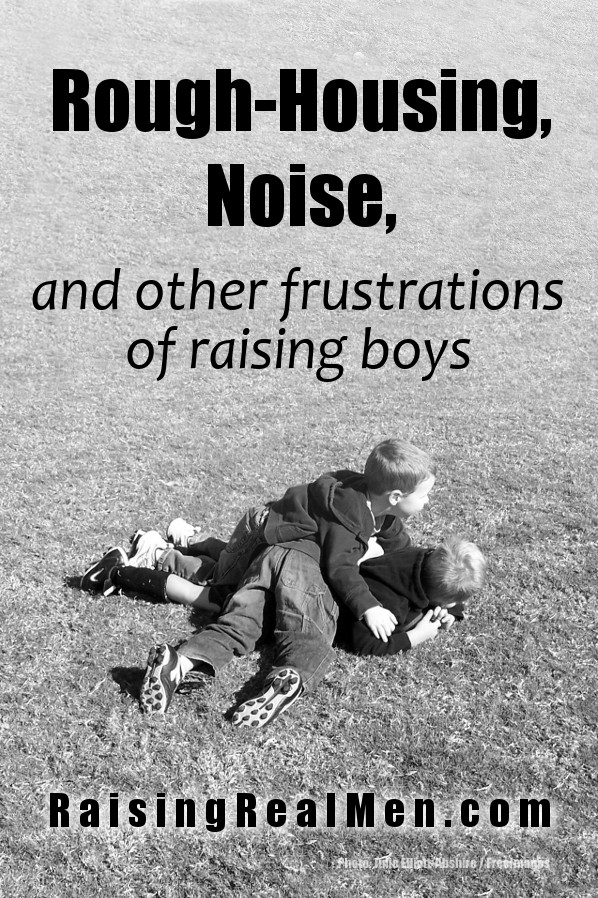 We have six boys (some of them grown now), and back when they were little, Melanie got a surprise.

When we lived in Louisiana, we had good family friends who moved from their home near Baton Rouge to Jackson, Mississippi, a good two hours away. Not long after, we were traveling back to visit our family in the Carolinas and made the slight detour to see them again. We pulled up in their driveway; the door of our station wagon opened and our eldest son, about five years old at the time, jumped out. His friend emerged from the house at about the same time. They met in the front yard and the conversation went something like this:

And they locked arms and rolled in the grass, trying to pin one another to the ground. Both mothers, stunned, circled around them saying, “Boys! Boys!” The fathers, on the other hand, ignored this behavior as perfectly normal. [ * ]

Is this normal? Yes it is! Boys are made to become men. Their roles as grown-ups include working to support themselves and serve others, and that may mean hard labor, dangerous jobs, military or police service, and other situations that require physical toughness. They feel a satisfaction in testing their growing strength even if they don’t win every time (consider Psalm 19:5, describing how a strong man rejoices to run his course). Some rough-and-tumble exercise is appropriate behavior for young boys, just as more physical sports like football and lacrosse encourage a more disciplined physicality.

Is it appropriate for Christians? Actually, we think it is—with certain reservations. The Puritan theologian William Perkins wrote a remarkable passage on a biblical view of sports and entertainment, and among the recreation he recommends are wrestling, fencing, and shooting sports. (We talk about this in more length in our book.)

Research suggests that moms have a hard time with this! Writing for Psychology Today, Dr. Eileen Kennedy-Moore cites a study which showed subjects a series of videos of boys wrestling. Is it a fight, or are they just playing? Children ages eight and eleven got it right 85% of the time. Adult men, and adult women who had brothers growing up, could tell the difference 70% of the time. Adult women who didn’t have brothers, identified nearly every scene as a real fight. (RTWT)

How Do You Manage Rough Play? 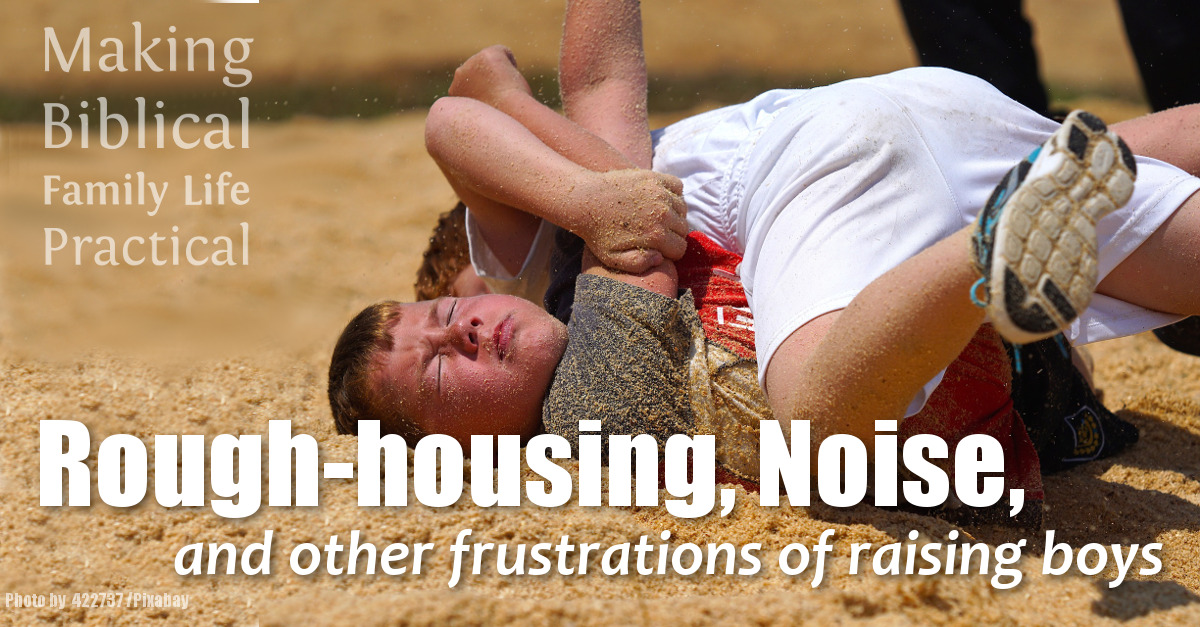 We don’t allow bullying – you know it when you see it. Big boys and small boys can wrestle and play physically without it becoming a demeaning thing – otherwise, how can fathers play with their toddlers? Learning to be physical without being overwhelming or brutal is an important life skill for a young man.

We have a “knock it off” rule – if they’re wrestling and someone calls “Knock it off,” they stop whatever they’re doing and check for problems. If they don’t, then it’s bullying.

We don’t play at sin. That’s foolish (Proverbs 14:9). Wrestling and physical competition are okay, but don’t pretend to be doing evil – we all have enough practice of sin without inventing games to rehearse it.

We also don’t allow boys and girls to mix it up. Even when they’re of similar size and strength, it’s not a good thing for either one. We know that high school wrestling is often co-ed in certain weight classes, but consider this angle – is it good to train our boys to overpower girls against their resistance? Really? Instead, it’s a cardinal rule for guys in our family, “You don’t fight girls, you protect them. Always treat them with gentleness.” We don’t want our girls to learn to expect the other treatment, either. (Read more here)

It’s appropriate to take it outside—especially as they get bigger. We’ve actually had to replace a couple of pieces of furniture.

If you don’t know, really know, then ask—”Is everybody having fun?” Are they smiling? Are they taking turns or repeating the contest? There are clues if you know where to look—and then, ask if you’re still not sure.

Sometimes it’s alarming, sometimes it’s hard on the clothing or the furniture, but it’s normal – maybe it’s time to clear some space and cheer it on!

6 responses to “Welcome to Rough House!”