Oh Murder! What Parents Need to Know About Teen Brains and the New Games

Posted by Hal and Melanie Young in Boyhood, Christian Living, Civilization, How to Be a Father, How to Be a Mother, Raising Boys, Teens
7shares 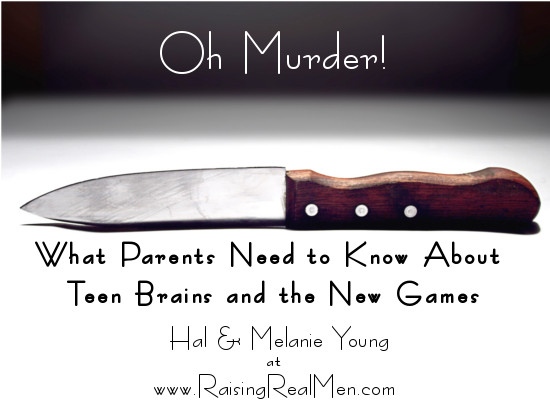 The first night of Boot Camp 9-12 is always so entertaining. We start off by describing the early signs that your child is entering puberty (and no, peach fuzz and a cracking voice are actually late signs). We talk about how kids in that stage start having huge emotional swings, from rage to tears, get all addle-brained and can’t get their schoolwork done, and become very judgmental about anyone’s sins but their own.

The hormonal surges of puberty cause emotional ups and downs like PMS, only we call it Pre-Manhood Syndrome when it happens to the guys! The good news is, they are growing up and they’re going to turn out to be really neat people. The bad news is you may all want to jerk each other bald-headed before it’s done. When parents hear all this confusing behavior is normal – and won’t last forever, their relief is palpable.

It’s not just their interaction with us that is at issue, though. While our young people are going through these emotional changes their brains are changing. The pre-frontal cortex that regulates the emotions is developing throughout the adolescent years. We shouldn’t be surprised to find out teens struggle to manage these strong new levels of emotion before their brains are entirely prepared to deal with them.

Knowing that, we are pretty concerned to hear about a new turn in video game development that emphasizes engagement of the player’s emotions as if the game were reality. A prime example of this is DayZ, a multiplayer, zombie apocalypse game that’s sold a million downloads since it was released a month ago.

Now, if you’ve read our stuff for awhile, you may know that we generally don’t have a problem with recreational (as opposed to addictive 🙂 ) gaming. We just have to make sure that:

Games like this one, though, violate both of those standards.

The game was designed to engage the player emotionally in the same way as if the action were happening in reality. To accomplish that the designer incorporated permadeath, the idea that a player would only have one life in the game and would lose everything if they lost it. Add in a kill-or-be-killed storyline, in which characters have to take supplies from others to survive, and marauding zombies and you have a game designed to induce you to experience fear and loss.

This can be seriously problematic for teens that are already dealing with hormone-induced emotional storms, but when we add in the developing status of their brains, it becomes much more concerning. Games with a significant negative (fear, loss) component simulate trauma and trauma has a real effect on their development. Considering that teens already seem more susceptible than adults to the addictive nature of the dopamine cycle that gaming provokes in their brains – encouraging users to seek more and more intensive stimulation, games of this nature seem like a bad idea.

Consider the testimony of one player, irr1449, on Reddit.

As soon as I realized what I had done, I felt horrible. This wave of grief ran over my body…I took it away from him in a second and he didn’t even see me coming. We were not in a firefight and he wasn’t threatening me. I just shot him in the back…Then the worst thing happened. I started to rationalize my kill. “Well he probably would of tried to kill me.” “Well it’s only fair, I’ve been killed 10 times by players like him.” “It’s only a game.” Anything I could think of to make myself feel better.

He goes on to say,

It also shows you how people can do horrible thing to others as long as everyone is doing it. (Think Nazi Germany). How every time you kill someone that feeling of remorse and grief is a little less painful until one day you feel nothing at all.

This game trains you to detach your actions from their consequences.

This game is truly a murder simulator.

That’s quite different from a game like Call of Duty where players pretend to be soldiers fighting for their country and the opposition characters are clearly enemies that pose a threat. One situation is moral, the other is not. That makes a difference even when it is all pretend. After all, 1 John 3 tells us that even to hate someone is the sin of murder, ” Whoever hates his brother is a murderer, and you know that no murderer has eternal life abiding in him.”

Parents need to help their teens understand why some games are okay and some are not. Explain your rationale, help them to see your concerns, give them the Biblical viewpoint. When you talk to them as adults-in-training, there are several benefits:

And that’s the goal, isn’t it? To raise men and women of God who make wise decisions based on His Word.

How do you handle gaming in your household? What do you do if your children want to play a game you’re not sure about?

6 responses to “Oh Murder! What Parents Need to Know About Teen Brains and the New Games”