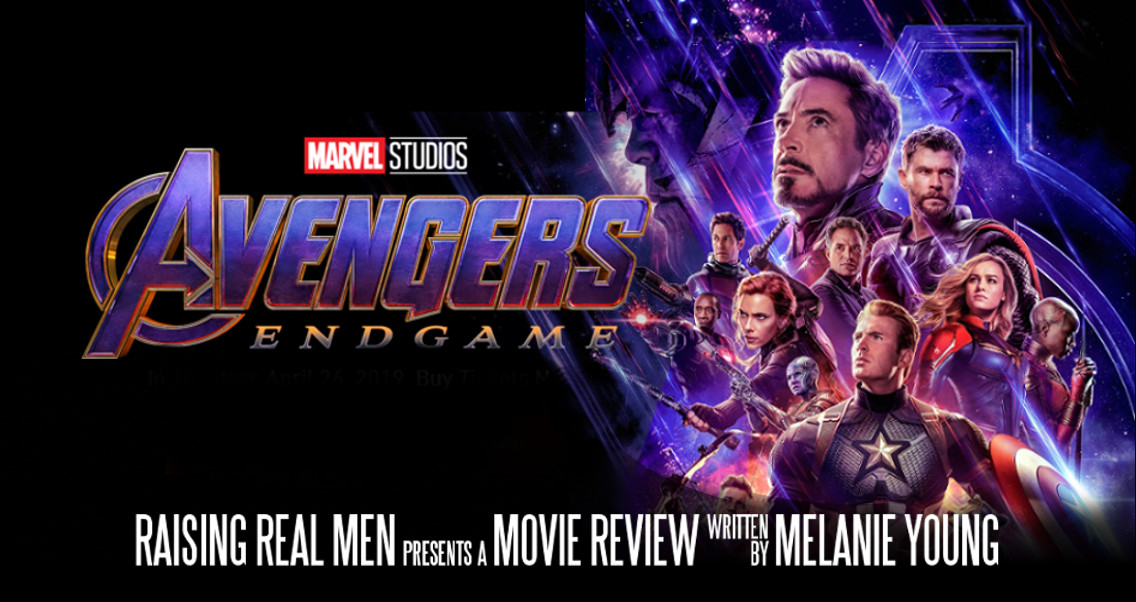 Avengers: Endgame – All the Feels

After the crushing defeat of Infinity War, Avengers: Endgame takes us on a rollercoaster of emotionally-charged scenes leading to a resolution you won’t soon forget.

Endgame opens in the moments before Thanos uses the Infinity Stones to snap away half of the inhabitants of the universe. Hawkeye and his family are enjoying idyllic family time outdoors when, in a blink of time, everything changes. Bring along some tissues, because Hawkeye’s heartbreak will rock you even before the opening title appears.

Before we can recover, the scene shifts to Tony Stark and Nebula, marooned in space and facing death as their oxygen slowly runs out. They have given up on being rescued and Tony has just recorded one last message for Pepper when hope appears in an unexpected form and returns them to earth to join the Avengers that remain.

The Avengers are determined to find Thanos and use the stones to bring the missing back. When they finally track him down, though, they are devastated to learn that there is no hope of restoring the former world.

Five years later, everyone has found a place of sorts. Under Natasha’s leadership, a few of the heroes are try to protect what’s left of the world. Steve is leading a grief support group and encouraging people to move on. Others seem to have lost their bearings in the wake of so much lost. Only Tony seems truly happy in a surprising plot-twist.

Remember the tragic mid-credits scene at the end of Ant-Man and the Wasp when Scott is trapped in the Quantum Realm because the Pym family disappears? In Endgame, we’re surprised to see that same van abandoned in a junk yard, quantum tunnel and all. What’s that? A rat is crawling across the van’s futuristic controls when suddenly Dr. Pym’s device is activated and Ant-Man is pulled back from the Quantum Realm — with no idea what has happened while he’s been gone! When he finds out, it gives him a crazy idea. 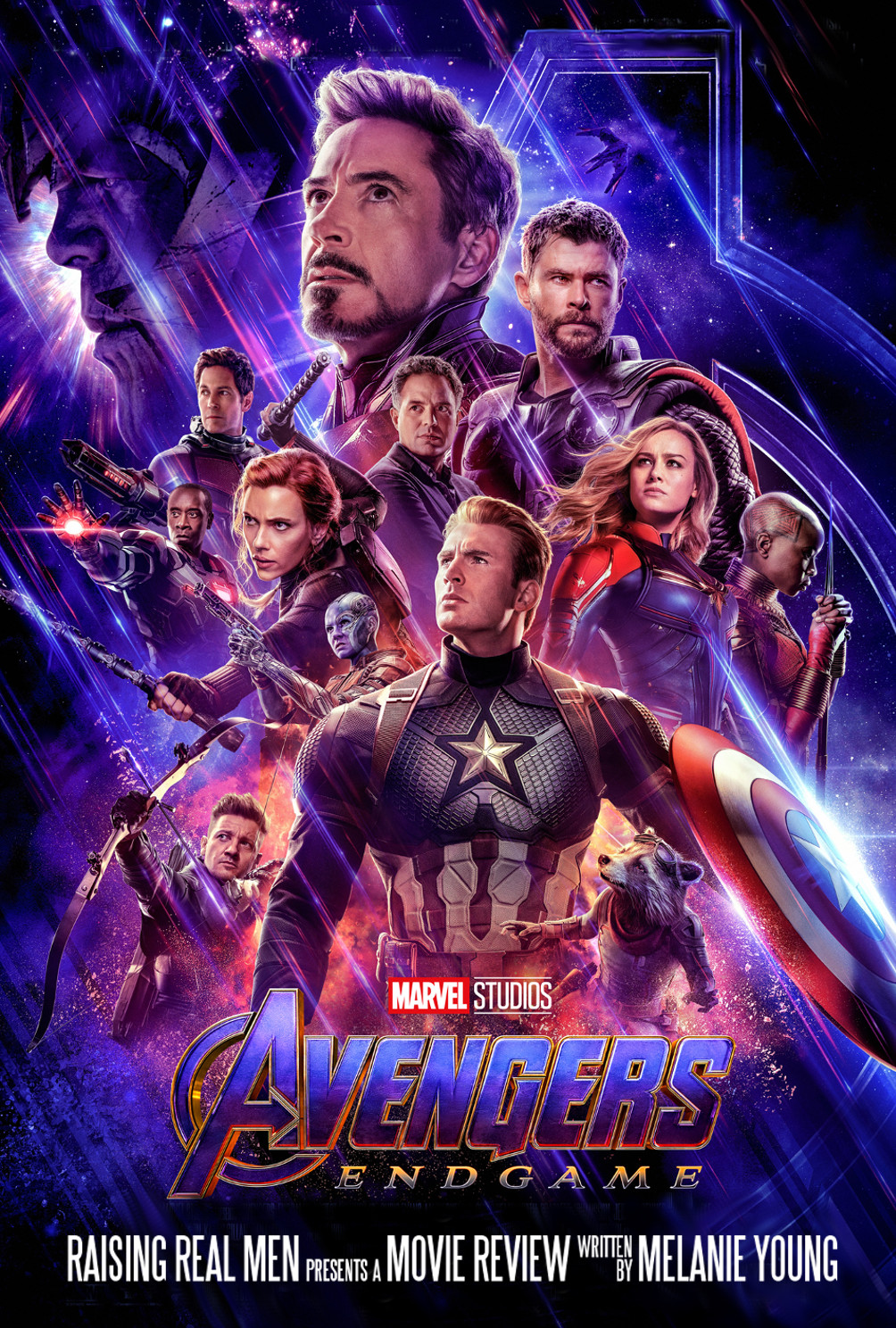 “I get emails from a raccoon. Nothing sounds crazy anymore.” – Natasha

It’s a plan that could succeed in bringing everyone home or it could destroy everything good that is left.

Sadly, the screenwriter include some completely unnecessary profanity and what’s worse, they have Captain America voicing it. You might discuss if that is what we would expect from his character. There is little sexual content save a couple of coarse references to Captain America’s backside. There is a lot of violence, of course, but most of it is not horrifying or disturbing, other than emotional fallout from the results of the violence. There is a brief, easy to miss reference to a same sex date in the grief support group.

Endgame has themes of redemption, heroism, and sacrificial love. It has ecstatic highs and demoralizing lows. It is, without a doubt, the most emotionally-laden film in the Marvel Cinematic Universe. Brilliant successes become agonizing defeats. Victory is snatched from the teeth of disaster, only to exact a heavy price. It’s a wild ride, but it ends in a very satisfying — and unexpected — way. This movie is about a thousand times better than Infinity War. We enjoyed it a lot. It’s appropriate for teens, quite intense for preteens (use your judgment), and too much for children, in our opinion.

Keep scrolling (after you watch the movie!) for questions you can discuss with your kids.

What are the major themes of Avengers:Endgame and where do you most clearly see those themes in the film?

Heroism is the most obvious theme and we see it stated pretty plainly when Thor’s mother says, “The measure of a hero is how well they succeed at being who they are… Now, you go and be the man you are meant to be.” Captain America’s pep talk just before they travel to the past for the Time Heist is pretty clear, too: “This is the fight of our lives and we are going to win. No matter what it takes.” Thor, Captain America, Iron Man, Captain Marvel, and all the rest of the heroes are made for this moment.

A theme of sacrificial love flows through the movie, as well. Tony and Pepper are discussing whether or not he should use his insight into the way to provide a sort of time-GPS to allow the Avengers to go back in time. Tony is afraid to risk the happiness he’s found with her and their daughter, but Pepper realizes, “You will never be able to rest, Tony,” while others are hurting. In the end, when Tony has given everything, Pepper reprises this thought with, “We’re going to be okay, Tony. You can rest now.”

Redemption is a powerful theme woven throughout Endgame. Natasha (Black Widow) finds Clint (Hawkeye) gone rogue in an attempt to assuage his grief with vengeance on evil. “What I want, you can’t give me,” says Clint. Natasha replies, “Killing all these people isn’t going to bring your family back. There’s a chance…” but Clint cries out in despair, “Don’t. Don’t give me hope!” Natasha answers, “I am sorry I couldn’t give it to you sooner.” Later, when they realize that one of them must die in order for them to acquire the Soul Stone, they each struggle to be the one to sacrifice themselves. Clint says, “Natasha, you know what I’ve done; you know what I’ve become.” She responds, “Well, I don’t judge people on their biggest mistakes.” Their competition to be the one to make the sacrifice continues to the last moment, proving both have overcome the evil in their pasts and had become real heroes. It would have been ever so much better when the willing sacrifice was made if Natasha was restored – then or later by the stones – but it is still a good redemption story.

Another lovely example of the redemption theme is the story arc of Nebula. By the opening of Endgame, she has planted herself firmly on the right side and desperately wants to undo what Thanos has done. Then she meets herself in the past – her angry, bitter, ruthless self who takes advantage of her and tries to kill her in disgust at what she’s become. This plot line comes to a head in the midst of the final battle for the gauntlet when Gamora questions the good Nebula about their relationship. Nebula admits, “I tried to kill you several times, but then we became friends. And finally, we became sisters.” When Gamora turns to the bad old Nebula and encourages her to turn on their father, Thanos, Nebula says, despairingly, “I am this,” but Gamora refuses to accept it and reaches out her hand, saying, “Come on. We can stop him.” When Nebula takes her hand, she signals her redemption.

How does the plot and theme of Endgame stack up against a Biblical worldview?

J.R.R. Tolkein, dean of the modern epic, once said something like this: “Every good story bears elements of the great story.” That’s certainly true of Endgame. The themes of heroism, sacrificial love, and redemption are Biblical themes, but this movie is a pale shadow of the truth. In the Marvel Cinematic Universe, redemption is not complete. All things are NOT made new. Thanos’ plan to make the universe over involves the slaughter of every living thing. The heroes who die in the end stay dead.  In our universe, though, redemption is beautiful. The mighty Hero, the God who gives up his life for us all, comes back to life again when evil is defeated on the cross. When Christ returns, He will make ALL things new and He will wipe away all our tears.  Read the last chapter of Revelation and see what a real new world will look like.

Did you notice any plot holes, weird science moments, or Easter eggs that referred back to another movie?

This film was full of all of these! Here’s a plot hole: How was Captain Marvel able to destroy an entire spaceship with her face, but she couldn’t do anything about the fleshly armies that came out of it?

You can take your pic of weird science moments. As one of our daughters mentioned, “It’s strange how the lightning braided Thor’s hair.”

Here’s a reference to one of the earlier movies: In Civil War, Tony was devastated that he’d never been able to say goodbye to his father or let him know how much he’d meant to him. In Endgame, Tony gets to meet his father and share a bit of his heart.

In an interesting hat tip to the comics where in one odd storyline Cap is with Hydra, in Endgame, Cap pretends to be part of Hydra to get the stone away from them.

What are your favorite moments?

Here are some of ours: Tony with his daughter, Cap and Tony making up, Hulk and Dr. Banner co-existing, Cap proving his worthiness by calling Thor’s hammer, when Cap calls out, “Avengers, assemble!”, the banging at end of the credits which may be hearkening back to the beginning of the whole series with Tony forging the Iron Man suit in the cave, and without a doubt, seeing Captain America happy with Agent Carter.

Want to learn how to teach your children discernment in media? Hoping they’ll look for real heroes to emulate? Read our book, Raising Real Men: Surviving, Teaching, and Appreciating Boys for help! From the parents of six sons.