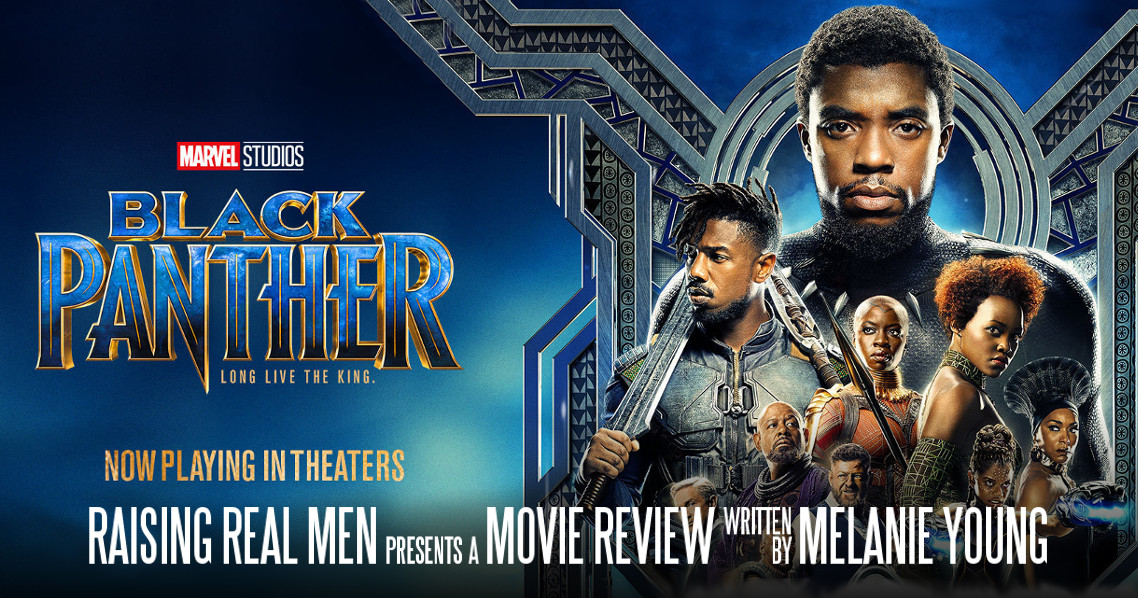 We all know the truth: more connects us than separates us. -T’Challa

Stunningly beautiful, Black Panther surprises with a message of unity and mercy rather than division and retribution.

The story opens at the end of Captain America: Civil War as T’Challa, prince of Wakanda, returns to the hidden nation to assume the throne after the death of his father. He faces some unexpected challenges, but fights his way through them to inherit the kingdom. It’s not long before a more serious challenge arises, though, one that would cost T’Challa, his country and even the world a very great price.

To be fair, I love superhero movies. I love epic battles between right and wrong. I love bigger than life heroes. So, I hoped Black Panther would be more than a politically correct showpiece. I hoped it would be fun.

Black Panther was fun! The aesthetic was amazing. Wakanda’s tech was sufficiently different from the norm to be believable as the science of a hidden culture. Scenes of Wakanda such as the vibranium mine, the Jabari throne room, and giant stone panther and ape are delightful. Although Wakanda is portrayed as an extremely wealthy high tech nation, it’s interesting that set modelers included bazaar and low rent district cityscapes. That’s true to life for big cities around the world, but Wakanda is supposed to be a nation of unparalleled peace and prosperity. Perhaps that’s a nod to the impossibility of achieving a perfect society even in Wakanda.

Chadwick Boseman, as T’Challa, well portrays a noble leader who wants to do right and to do right by his people. His growth comes through learning the truth about his father and realizing that his priorities may need to change. Letitia Wright, as his sister Shuri, provides some levity and fun as the Q (the scientific genius and gadget master of the James Bond movies) of Wakanda. Both Shuri and T’Challa’s love interest, Nakia, have major, plot-critical roles in the film. Martin Freeman, as the bumbling, but noble CIA officer Everett K. Ross is, well,  Martin Freeman — always funny and endearing whether a hobbit, a Watson, or a spy.

The themes of Black Panther are really good. One major theme is noblesse oblige (pronounced NO-bless OH-bleejzh), the age old obligation of people with more nobility, power, wealthy, strength, or other gifts to act with generosity and mercy toward the underprivileged. One of the basic conflicts of the movie concerns whether or not Wakanda should maintain its anonymity and safety or use its wealth and knowledge to help the less fortunate.

Another theme is that it is wrong to do evil that good might come. Notice T’Challa’s commitment to following the rules even when it hurts him. Also, although Nakia and General Okoye make opposing decisions about how to handle Killmonger’s coup, they both are basing those decisions on principle. By contrast, Killmonger desires to help people of African descent around the world, but his plan would bring death and destruction in order to bring that about. Killmonger promotes violence and retribution as the answer to the problems of the underprivileged. 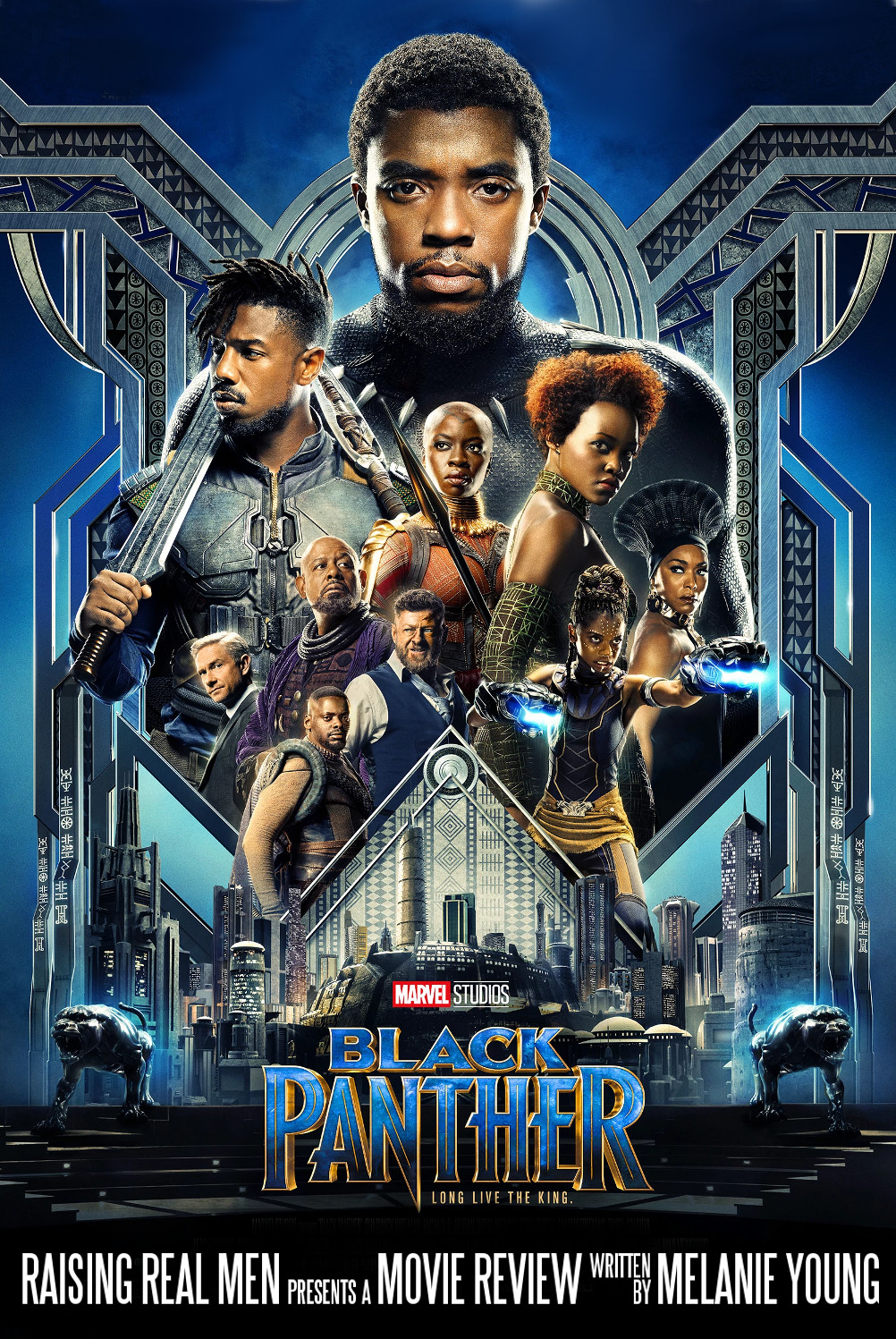 The final theme is that people are more alike than different, so our history or ancestry should not divide us. I really appreciated that Black Panther stood clearly on the side of right — of peacemaking, education, and forgiveness and against hate and violence.

There were a few problems in this otherwise excellent movie, though. Animism and ancestor-worship were not only accepted as true, but actually shown in the movie as real. T’Challa visits and consults with his dead father and ancestors. For this reason, I don’t believe Black Panther is suitable for anyone young enough not to really get that it’s a made up story, no matter how engaging. With kids of any age, you’ve got to discuss this. In much of the Marvel universe, false gods are exposed as people misunderstanding a more advanced technology. In this case, though, the false religion is given credibility.

Costuming might be an issue for some viewers. There are quite a few scenes with bare-chested guys. Some female costumes are form-fitting and have bare midriffs and shoulders. There’s almost no sexual content in the movie at all, though. There is some foul language, but it’s relatively infrequent and is most often spoken by bad guys. Older kids should be able to filter it out, but it may be problematic for younger ones.

Naturally, there was a good bit of violence. Ritual combat and outright battle scenes happen several times. Stabbing, shooting, and blasting is common. The violence is not particularly depraved, bloody, or shocking, though.

The CG was great, but there are a few weird moments. Watch the people dancing on the cliff during the initial challenge to the throne. What was also weird is how very little we got to see of Black Panther in action. Most of the fighting happens after a potion has been administered to remove T’Challa’s Black Panther powers for a time. That’s just strange in a movie where he’s the title character. I wanted to see more of him in action and more of his new suit in particular.

Generally, this film was a nice addition to the Marvel Universe and one that should spark some good discussion in your family. We’d recommend it for preteens and up.

Listen, though. Like all Marvel movies, there are bonus scenes in the credits. Never leave a Marvel film until the last credit has rolled up the screen. In Black Panther, you’ll miss the statement that really drives home the theme if you don’t wait until at least the mid-credit scene before you leave.

Teach Your Kids to be Wise

We’re surrounded by the messages of media, from our laptops and phones to songs on the radio. Learn how to teach your children discernment, protect them from being manipulated by the messages around them, and to be wise consumers of media. Join our email community of thousands to download it free right now. Why did T’Challa’s father kill his brother? (He was protecting his friend who was about to be killed.) Was he right to do that?

Why did T’Challa’s father leave behind his brother’s son? (He was afraid to expose the existence of Wakanda to more people.) Was he right to do that?

Why did Killmonger order the heart-shaped herb to be destroyed?

Killmonger is motivated by revenge. What does the Bible say about revenge? (Romans 12:19)

After taking the heart-shaped herb, T’Challa sees and talks to his father after he has died. Is that Biblical?

The Wakandans worship their ancestors and pray to them and the black panther idol, Bast. Who does the Bible say we should worship? (Exodus 20:1-4, Deuteronomy 6:4) Should we pray to our ancestors? (1 Timothy 2:5)

What is one of the themes of this movie? The theme is what the screenwriter and director want us to believe or do because we watched the film. It’s what they are trying to teach us. (See above)

Black Panther, PG-13, Recommended for more mature preteens and up. 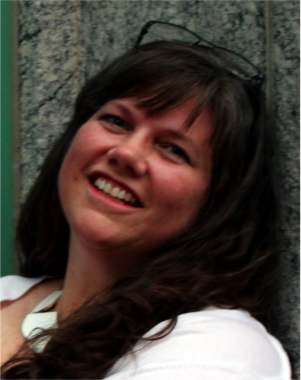