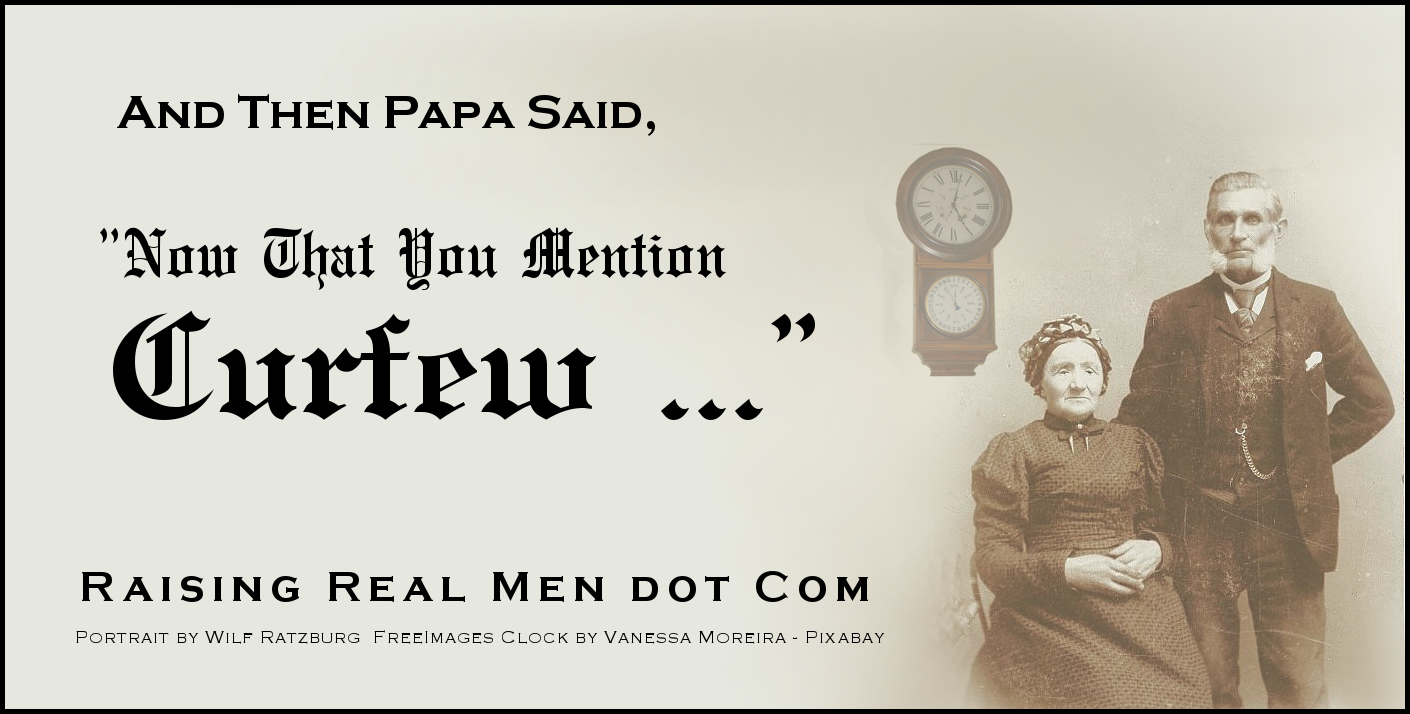 Q&A: “What Time Is Curfew at Your House?” 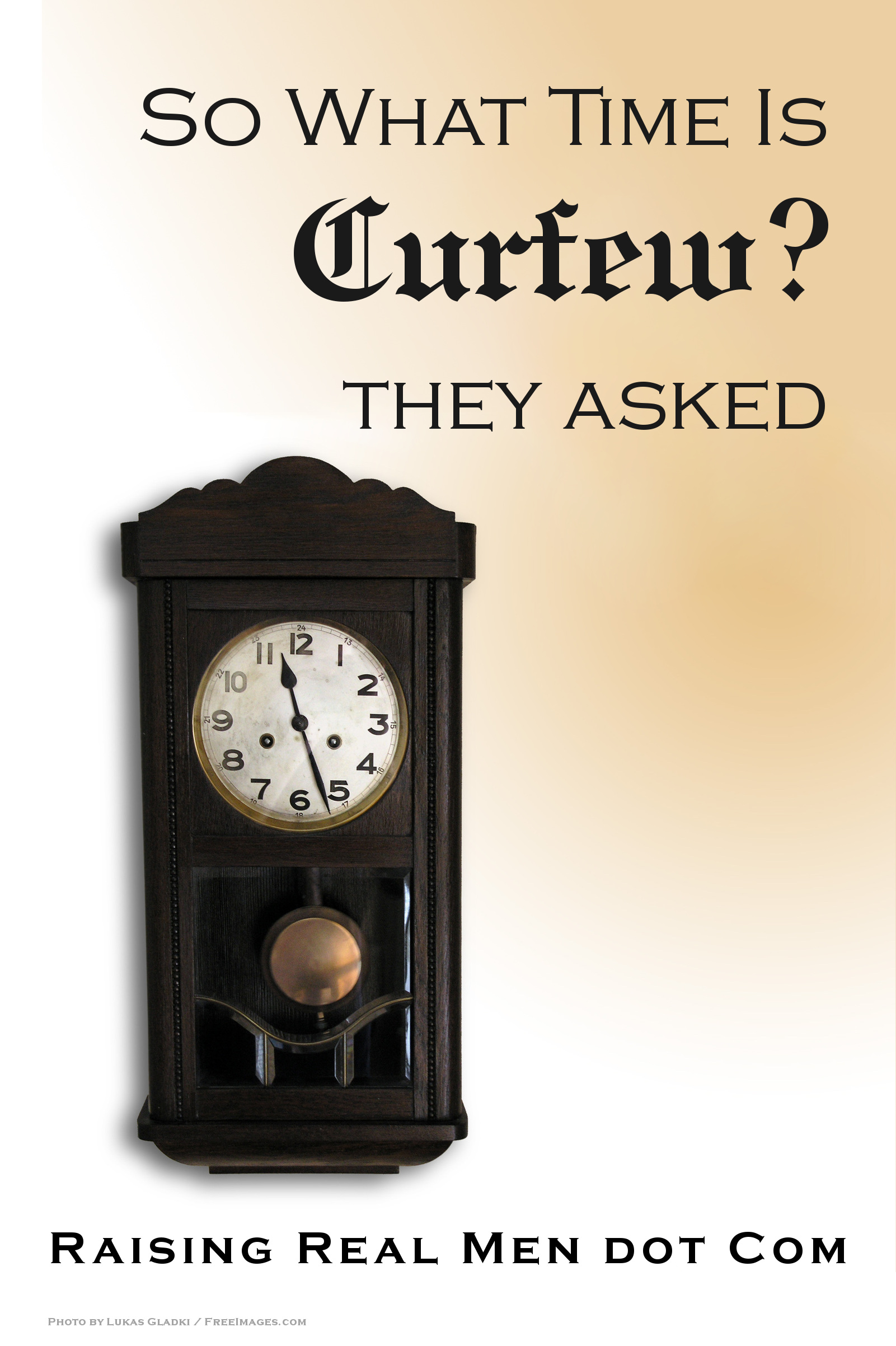 Several readers and audience members have asked us something like this:

What time is curfew at your house?

When do you require your kids to be home?

Is it different for teens and twenties?

It’s not an uncommon question but our answer may be unexpected–because we don’t have a formal curfew at our house.

Are there curfews in Scripture?

Actually, there are at least two examples – in Exodus 12, when God prepared the Israelites for the death of the Egyptians’ firstborn, He told them to mark the doorway with the blood of the lamb, and the Angel of Death would pass by. Moses told the elders in verse 22-23,

And none of you shall go out of the door of his house until morning. For the Lord will pass through to strike the Egyptians; and when He sees the blood on the lintel and on the two doorposts, the Lord will pass over the door and not allow the destroyer to come into your houses to strike you.

And in Joshua chapter 2, where Rahab the harlot helped conceal the Israelites who came to spy out Jericho. When she helped them escape the city, they told her when the attack came, to bring her family and relations into her house and tie a scarlet cord in the window – and as long as they stayed indoors, they would be safe from harm.

Admittedly, these were special occasions of the world-changing sort – not much guidance for managing your teenagers today!

But we realized when our sons were reaching the age when this sort of rule comes into play, that we really were managing quite well without a formal curfew at all.

So you don’t have curfews?

Not in the way most people think about it.

We discovered that they weren’t really necessary if our teens understood and followed some basic rules of consideration. When one of us leaves the house for some reason, we don’t just skip out and leave no word – we’ll let the family know that we’re going, where we’re planning to go, and generally when we expect to be back.

It’s basic courtesy – It’s just not kind to leave people confused and uncertain – even worried – when they can’t find you.  What if someone really needed your help before you left, or needed to share something with you or ask a question? Some of that can’t be fixed by cellphone once you’re in the car. And maybe, just maybe, there may be some questions about why you’re going at all.

It’s good teamwork – If one of us is making a run to the grocery store for a gallon of milk, there may be other things to pick up, or other errands that could be combined. Sure, we routinely text back and forth in the middle, like, “Are you still at Walmart? We’re out of paper towels,” But that may not be possible if no one knows you’re even there.

It’s safety – Frankly, it’s good to have people expecting you back. If something goes wrong and your cell phone doesn’t work, who’s going to know where to look for you? Or that it’s time to call out the search team?

But how does that look at night, with teenagers, just “hanging out” or socializing?

Pretty much like it does during the day time!

“Hey Mom – Dad – there’s a contra dance over in Carrboro Friday night. Any problem with us going?”

“Going by yourselves, or what?”

“We were going to ask a few of the girls from church if they’d like to ride. That keeps the number of guys and girls balanced at the dance.”

“That sounds okay to us. How late do you think you’ll be?”

“Well, be sure your cell phone’s charged!”

This, by the way, is not our 16-year-old asking, but 18- to 20-year-olds. Technically, they’re adults and don’t have to ask anyway. But they do it because of the relationship we’ve been able to build with them.

We found that we can do this because we’ve worked out issues of trust and dependability in early years, and earlier hours, and shorter distances. They learned to keep us informed – “Hey, we got here safe and on time” and “We’re just leaving now, expect to be home in an hour” or “Stuck in traffic – got tangled up with the stadium exits.” It’s no more and no less than we do for each other as fully grown married folk. And as they showed themselves faithful and considerate, we felt more and more comfortable giving them more liberty.

This doesn’t mean there are no schedules or expectations at our house. Our kids have a bedtime, and we try to keep them consistent both into bed and back out of it. We don’t hesitate to say, “Hey, kids, it’s pretty late – let’s not start another video (or game or story or project).” And sometimes – like last week, when our town was recovering from a flood – there are external limits, like a city-wide curfew to prevent injuries or mischief while the lights were out.

But we try to keep in mind that Hebrews 5:14 says that the mature believer is able to discern and choose between good and evil because he’s had the freedom to consider options and make choices. That requires us to loosen the leashes a bit as our kids age, and as we see the fruit of our teaching and the ongoing relationship between parent and young-adult child!

Get more encouraging, practical help by signing up for our newsletter!

One response to “Q&A: “What Time Is Curfew at Your House?””