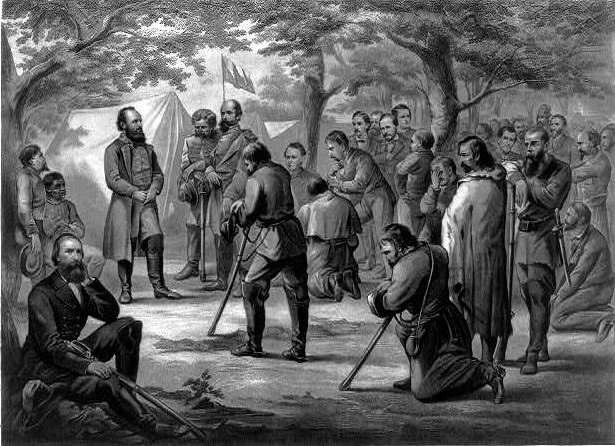 The Power of Pressing On Anyway

Posted by Hal in Uncategorized
6shares

One of our sons called home from college and mentioned an introductory course he was taking in a foreign language. He had gone to the professor and asked him to call on him more often in class, because his spoken language wasn’t very good yet and he wanted to get better.

It’s a refreshing thing to see a student really taking a course “by the horns” with the idea of mastering it – not just passing the class minimums. Most students would slump down in their seats and pray the professor didn’t call on them, and yet they’re sabotaging their own best interest. If you wanted to avoid the process of learning, why’d you sign up for the class?

Sometimes you meet an obstacle and you know you’re on the wrong track. Sometimes, though, the only solution is to swallow your pride, lean into the problem, and fight your way to the goal line!

General Thomas “Stonewall” Jackson was an adult convert to Christianity during his time in the Mexican-American War. When he died in 1863, midway through the Civil War, he was widely known in both the Confederate and Union armies for his deep faith and heartfelt prayer life.

It didn’t come naturally, though. When Jackson first came to teach at the Virginia Military Institute a few years after his return from Mexico, he joined the local Presbyterian church under the leadership of Rev. Dr. William White. Jackson’s biographer R.L. Dabney wrote how Jackson was a regular member of the midweek prayer meeting but felt he wasn’t living up to his duty:

The prayers were usually offered, under the pastor’s direction, by the elders of the church, or other experienced Christians. Dr. White took occasion, in his Sabbath instructions, to enforce the advantages of these meetings, and said something of the duty of those who could appropriately lead the devotions of others, to render their aid in that way, overcoming, if necessary, false shame.

In the course of the week, Jackson called to ask him if he thought him one of the persons to whom the latter exhortation was applicable. He proceeded to say that he was unused to all forms of continuous public speaking; that his embarrassment was extreme, especially upon so sacred a topic, in expressing himself before a crowd; and that he had therefore doubted whether it was for edification for him to attempt the leading of others at the throne of grace. Yet, he knew that, inasmuch as these concerts of prayer were of eminent utility, the general duty of participating in their exercises was indisputable, as to Christian heads of families, and other suitable persons.

“You,” he said, “are my pastor, and the spiritual guide of the church; and if you think it my duty, then I shall waive my reluctance, and make the effort to lead in prayer, however painful.” He closed by authorizing him to call upon him for that service, if he thought proper. And his diffidence in all this was so clearly unaffected, that no mortal could have mistaken it.

After a time, the pastor called upon him to pray. He obeyed, but with an embarrassment so great, that the service was almost as painful to his brethren as it obviously was to himself.

The invitation was not repeated for a number of weeks, when, meeting Dr. White, he noted that fact, and indicated that he supposed the motive for sparing him was an unwillingness to inflict distress through his excessive diffidence. The good minister could not but admit that he had thought it best not to exact so painful a duty of him, lest his comfort in the meeting should be seriously marred.

“Yes,” said Jackson, “but my comfort or discomfort is not the question ; if it is my duty to lead my brethren in prayer, then I must persevere in it, until I learn to do it aright; and I wish you to discard all consideration for my feelings in the matter.”

He was again called on; he succeeded in curbing his agitation in a good degree; and, after a time, became as eminent for the gift, as he was for the grace of prayer.

Are we running toward our duties, or are we running from them? How are our kids dealing with the challenges in their lives?

One response to “The Power of Pressing On Anyway”