Posted by Hal in Uncategorized
38shares

Davis Carman is a friend of ours (and the owner of Apologia Educational Ministries). He’s also a mechanical engineer and a car buff. Recently he got to test drive the new Tesla Model 3, and his initial response was so enthusiastic we asked him to give us the full story.

Is It Ludicrous to Test Drive a Tesla? 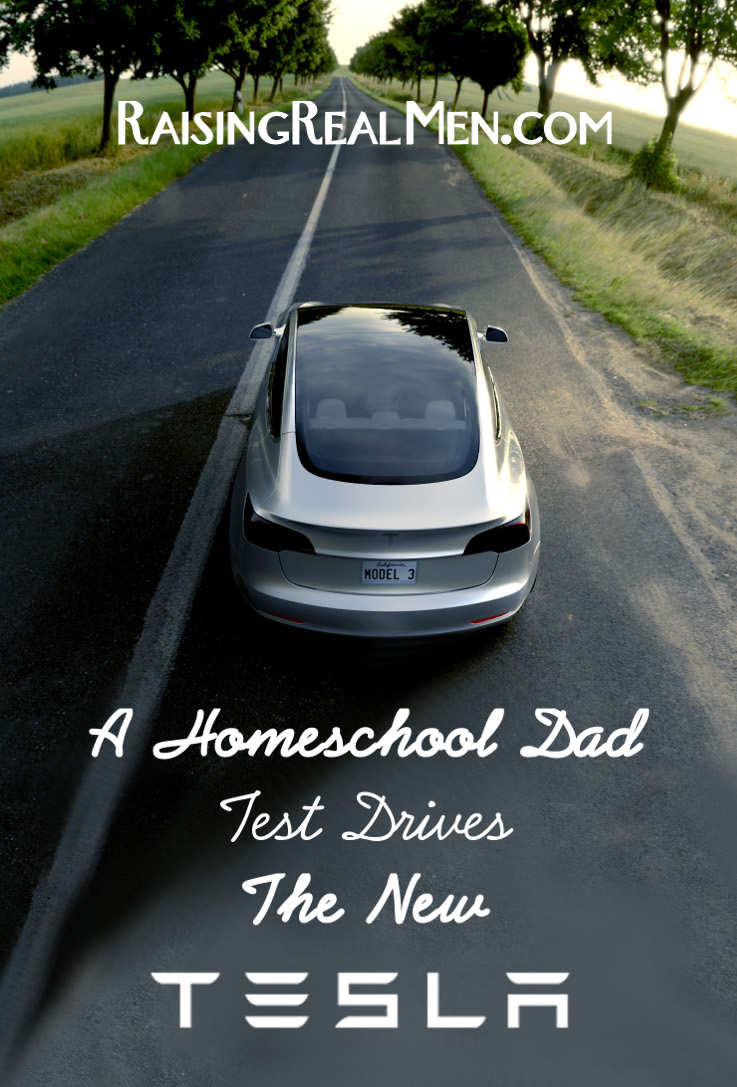 On March 31, 2016, I watched the product-launch video for the new Tesla Model 3, the first mass-production vehicle from Tesla Motors and its founder Elon Musk. Within twenty-four hours, Tesla had taken 100,000 pre-orders for the car.

The company’s first all-electric vehicle was a high-priced, low-volume roadster that few people noticed. They then introduced the Model S several years ago, attracting a few more buyers. A recently launched high-end SUV is also available, designated as the Model X.

As a mechanical engineer and car enthusiast, I’ve followed Tesla with considerable interest. After watching the launch video, I decided it was time to schedule a test drive, which took place on Friday April 15, 2016. No surprise, I found it a much more enjoyable way to spend the day than working on my taxes.

It’s important to note that I took my two youngest sons with me, age twelve and fourteen. This is one of the advantages of homeschooling. They were anticipating the big day, and they were not disappointed. I do believe I earned a few Dad-of-the-Month kudos that day.

Let me cut to the chase: I was blown away. I was ready to be wowed, but the tour and test drive far exceeded my wildest expectations. Here is my review of this absolutely amazing vehicle.

What immediately struck me was the simplicity of the design. There is no complex mass of hoses, wires, belts, fans, pipes, and metal parts. The only compartment I found for a fluid was the windshield washer. The underside is a clean and flat piece of metal, which holds the batteries.

This is an all-electric vehicle, which means you will never run out of gas because you will never buy gas again. You simply plug it into an outlet at home each night and wake up to a fully charged battery the next morning. The Tesla Model 3 has a range of 215 miles. A twenty-minute stop at one of the fast-charging Tesla stations will charge your battery up to 80 percent full, just enough time to grab a quick meal. With more than 600 locations and 3600 Superchargers strategically placed throughout the United States, it is now possible to drive cross-country in a Tesla. By the way, you get free electricity at all Tesla charging stations for life. Sweet!

Little to No Maintenance

Not only will this vehicle never leak oil, but you will never again need an oil change. The electric motor doesn’t require lubrication. There is no radiator to fail, no timing belt to break, no tune-up every 20,000 miles. There is simply no scheduled maintenance required. It’s that awesome!

The key fob resembles the car. My boys liked that touch. A tap on the rear opens the trunk. A pat on the front opens the hood. Otherwise you just keep the keys in your pocket.

Trunk Space Front and Back

The rear trunk is more spacious than that of any vehicle I’ve ever seen and has a greater capacity than most SUVs. And because there’s no bulky engine, the front compartment doubles as extra trunk space.

You won’t find a typical grill on the front of a Tesla because the engine doesn’t require air flow for cooling. The body design of the front end emphasizes this fact. You also won’t find a gas cap messing up the clean lines of the body panels. But there’s got to be a place for the electric plug to attach somewhere, right? Yes. Tap the driver’s-side rear light, and it pops open, providing access to the electric plug—definitely a cool feature. In fact, I tapped it open and closed several times just for fun.

When you walk up to the car with keys in your pocket, the sleek and flush door handles pop out. This allows you to pull the door open and step into the seat. Once the door is closed, the handles pop back into place, restoring the car’s smooth, sleek look and again upping the cool factor.

Inside, the car had so much room; it almost felt wrong. There’s no big, bulky transmission taking up space between the driver and passenger, and no driveshaft means there’s no hump in the floor in the back seat. The extra room makes the car extremely comfortable.

An all-glass roof blocks out 98 percent of the sun’s rays, yet you can see out just fine. When fully open, the sunroof creates the largest opening I’ve ever seen. I personally like sunroofs—the larger the better. You can easily adjust the size of the opening with the touchscreen control panel.

Speaking of controls, the heart of the technology is a massive seventeen-inch touchscreen control panel. I used the split-screen function to keep the wide-angle rearview camera on the bottom half and the GPS, power consumption, radio, or something else on the top half. The temperature controls are displayed on the extreme bottom of the screen for quick and easy adjustment. Navigating the screen was simple and intuitive for anyone who has ever used a smartphone app or tablet.

Quiet as a Mouse

Unlike a conventional car, you don’t start a Tesla. Once you sit down, it’s ready to go. Just put a foot on the brake pedal and shift into gear. Then press the pedal and you’re off. There’s no sound, vibration, or feel of an engine revving. It’s quiet as a mouse. Also, the car doesn’t coast when you take your foot off the “gas” because of the regenerative brakes. That took a little getting used to, but it was easy and I quickly grew accustomed to the new normal. The car was poetry in motion as it silently, smoothly, and artfully moved us down the road. 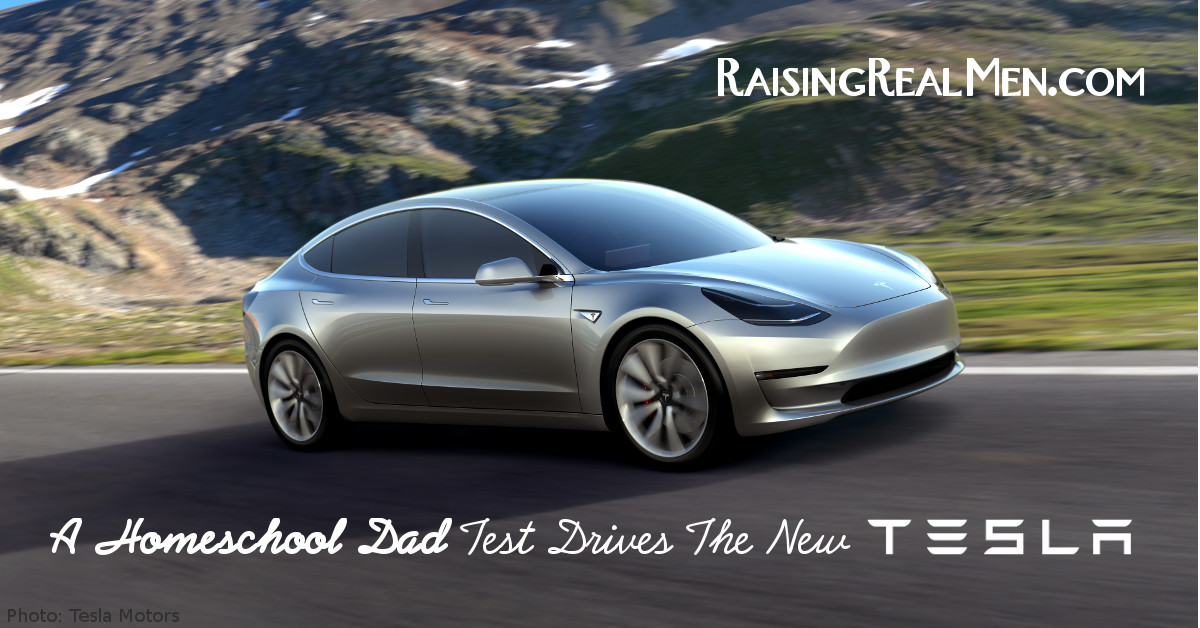 Cruise control was a nice feature in its day, and today some cars are equipped with smart cruise, which causes the vehicle to automatically slow as it approaches a slower-moving car. Still others come with a lane-departure warning system that sounds a beep if you drift left or right. The new Tesla auto-pilot feature takes the next logical step. With a double click of the cruise control stick, the vehicle not only maintains a safe distance from all cars but also steers itself to stay in your current lane. When I signaled to move one lane to the left, the car automatically changed lanes, being sure to watch for any oncoming vehicles. The car stayed in the lane until I manually signaled left or right to tell it to change lanes again. After a period of time, the car will ask you to put your hands on the steering wheel to prove you’re still awake. If you fail to do so, the car will turn on its flashers and slow down until you retake the controls. I felt perfectly safe letting go of the steering wheel and allowing auto-pilot to move us down a crowded interstate.

Tesla vehicles come standard with all-wheel drive. It’s designed this way in order to connect smaller electric motors to all the wheels rather than one big one in the front or back. The result is astounding in terms of control and performance. Tesla doesn’t make a 4×4 truck yet, but if and when they do, I have no doubt it will immediately be the most reliable in that market.

This is the feature I was most eager to test. A really fast car today comes with 425-plus horsepower and can do 0-to-60 mph in just over five seconds. Faster cars, such as a high-end Porsche, can achieve this feat in just under four seconds. The Tesla Model S comes in three varieties. The 70D can accelerate from 0 to 60 mph in 5.5 seconds. The 90D can do it in 4.2 seconds. The P90D surpasses them all with a 0-to-60 acceleration time of just 3.1 seconds. With a flip of a switch on the control panel, I was able to shift into “ludicrous” acceleration mode and do this in a crazy 2.8 seconds, causing the blood to rush to the back of my brain. My sons said the G-forces they felt were stronger than on any roller coaster they’d been on. I can’t think of a faster car on the road today. By the way, the top-end speed is 155 mph, limited by the computer.

The Model S starts at $70,000 and can cost as much as $125,000, depending on battery range, acceleration, and other options. The new Model 3 is considerably more affordable, starting at $35,000. As a result, I fully expect to see many more Teslas on the road in the days ahead.

The only disappointment I felt was when we left the showroom and walked back to my well-loved, eight-cylinder, gas-guzzling, eighteen-year-old BMW. Even though I’ve taken good care of Zidgle (as I affectionately refer to him), he has multiple maintenance and repair issues that pull at my time, attention, and money. I stepped hard on the gas pedal as we left the parking lot, hoping to feel some pride in its abilities, only to be sorely let down. It sounded tough, but the acceleration forces didn’t phase me a bit. I already miss that dizzy sensation that came with the immediate torque and blistering speed afforded by the Tesla’s electric motor.

What to Look for Down the Road

Personally, I believe this new vehicle is going to totally disrupt the automotive industry. Battery life already puts vehicles well in the 200- to 300-mile range. This will only increase as Tesla continues to develop battery technology. These vehicles are going to usher in a new era in which electric cars are commonplace. As of this writing, Tesla has received deposits for more than 400,000 units. Currently, the best-selling vehicles in the United States—the Ford F-150, Toyota Camry, and Honda Accord—each sells roughly 500,000 units per year. I fully expect the Tesla Model 3 to be the number-one-selling car in America by 2018.

Being a mechanical engineer and homeschooling advocate, I want to make two analogies that I think are appropriate. On the engineering front, comparing a Tesla to a conventional gasoline-powered car is like comparing a sixty-inch, flat-screen, Internet-enabled, high-definition television to a heavy 13-inch box with a fuzzy black-and-white picture and vacuum tubes.

Similarly, I would say that comparing home education to public schools is like comparing a Tesla to a conventional gasoline-powered vehicle. One of them employs archaic methods, is highly inefficient, and isn’t very exciting—but it’s what “everyone” drives. The other is simple, beautiful, high tech, and produces great results. Which one would you rather drive?

Walking by faith and enjoying the homeschooling adventure of a lifetime!

Davis Carman is the president of Apologia Educational Ministries, the #1 publisher of Creation-based science and Bible curriculum. He is also the author of four illustrated children’s books designed to instill a biblical worldview. Good Morning, God is based on Deuteronomy 6, A Light for My Path is an ABC book based on Psalm 119, and In the Beginning, is based on the Creation account in Genesis. His latest, Psalms to Know Early will be available the summer of 2016. He believes that if there was ever a time to homeschool, it is now!

4 responses to “A Homeschool Dad Test Drives The New Tesla”