Clavius is a veteran soldier, tribune of the Tenth Legion, serving as Pontius Pilate’s fixer and go-to man. The announcement, “Tribune, Pilate summons you,” starts many interviews that end with the dismissal, “Take care of it.” The prefect is beset by zealots during the Passover festivities, and the Emperor expects to find order—“Or—der…” he warns Clavius—during his upcoming visit.

But a religious controversy between the Jewish leaders and a small band they call “heretics” has led to a politically expeditious crucifixion—and now Pilate needs his fixer to take charge of the mob that’s collecting at the cluster of crosses at Golgotha.

Clavius (Joseph Fiennes) is a lonely man who seeks the Roman equivalent of the American dream – political advancement, an honorable family, wealth, and a villa in the countryside. Yet he sees Pilate possesses these things and is burdened with more cares, not fewer. What else does this tired soldier seek? “Peace. … A day without death,” he says, soaking the grime and blood of the day from his battered frame.

He doesn’t realize he just helped kill the One who could give him that. 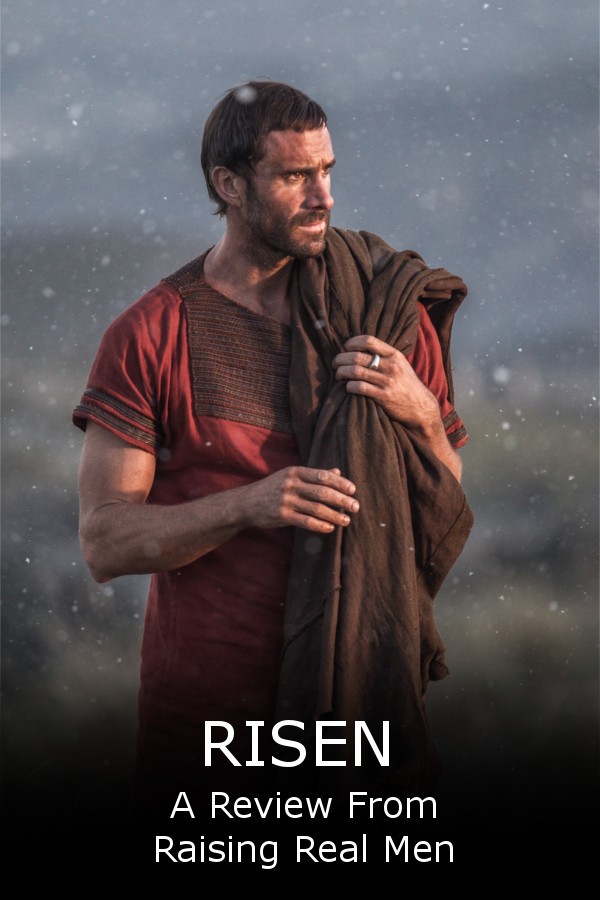 Clavius finds himself struggling with a conflict he can’t understand, with people unafraid of death—not like the martyr-complex Zealots, but with a calm assurance. “I’m not afraid … I’m already free,” one prisoner responds when Clavius threatens. “I can’t reconcile this … with the world I know,” he tells Jesus.

The search and need for truth. Clavius is not above deception—for example, suggesting that Pilate claim a convenient body is actually the purloined corpse of a still-dead “messiah.” But repeatedly, he calls for the truth from his soldiers, from prisoners, and ultimately, from life. What really happened at the Arimathean’s garden? Why are these people so happy—and so convinced of the Resurrection of One that Clavius assured was dead on the cross? Pilate’s political mission to find the dead Jesus (correctly called Yeshua throughout) becomes Clavius’ personal mission to find the living One. When Jesus asks him, “What do you fear?” Clavius pauses, then answers, “That I might be wrong.”

The futility of success. “Your ambition has been noted,” Pilate tells Clavius—who echoes the observation to his young lieutenant, Lucius. Pilate complains of the demands of the Emperor and the trouble that surrounds him, then gestures to a moldering corpse nearby and says, “But it doesn’t matter … in a few years, we’re all that.” As Clavius comes closer to understanding the truth, he begins to remove his military gear until all that remains is his tribune ring.

Clavius is our “everyman.” Searching after rumors of Jesus’ resurrection, Clavius stumbles into the upper room meeting from John 20:26-29 and is invited—by the unexpectedly healthy Jesus Himself—to join them. Instead, he first recoils in amazement and fear, then returns … but lingers around the edges, present but not really in the group. It’s much like our reading of Scripture, where God invites us to listen in to His most intimate conversations with the disciples … though we are invisible to the people He speaks with. Clavius is often alone with his thoughts, wrestling with this unprecedented mystery; like all of us, eventually he has to come to grips with God’s call, on his own.

Violence: One of my mid-teenagers, who has watched his full share of super hero action films, said, “That may be the most violent movie I’ve ever seen.” Granted, the cartoon violence of Guardians of the Galaxy is very different than the brutality of 1st Century combat – death by sword, spear, javelin, and blunt object. Those kind of injuries, we can sympathize with, unlike being vaporized by a space weapon, so we respond differently to the events on screen.

For the amount of killing, there’s remarkably little gore – there is blood, but mostly seen after the injury. Clavius is present at the Crucifixion and you are confronted with the final stages of this inhuman form of punishment—which he describes in detail when interrogating an unhelpful witness. There are some graphic sounds, as when Clavius executes a zealot leader after the battle.

It’s real, and historically accurate, and probably distressing to young or sensitive viewers. 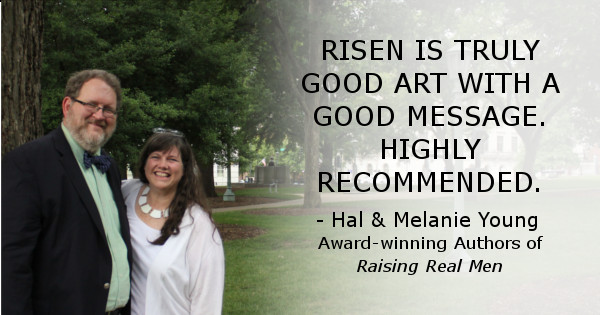 Death and corruption: The story is really about death, mortality, and Christ’s victory over it. As part of that, we see corpses – lots of them – in different stages of decay. Legionnaires killed in a skirmish are cremated; Pilate summons Clavius from the ceremonies and says, “You smell like meat. Feast?” “Funeral,” Clavius replies. Clavius orders his soldiers to locate and exhume every body buried in the previous week, seeking to locate the body of Jesus which was presumably stolen and hidden or secretly buried. Unsuccessful, he offers a well-decomposed specimen to Pilate as a substitute, pointing out the obvious wounds of crucifixion. “But I don’t recognize his face,” Pilate protests. “Neither will anybody else,” says Clavius. The life of a Roman soldier requires a strong stomach and hardened sensibilities!

Representations of Jesus: One reviewer (Michael Potemra on National Review Online) said He is “uncannily real” –kind, gentle, brotherly, but very Mediterranean in appearance, and not Hollywood-perfect with every curly hair in place. Certainly the physically-present Jesus wasn’t identified by a glowing nimbus wherever He walked, but it’s unusual to see Him portrayed in a fashion that wasn’t symbolic in some way—taller and cleaner than the crowd, more ornamental in His dress, a nobility in His face. This film’s representation makes Him look quite … average … somehow, though it’s clear that He’s totally not.

Extrabiblical or inaccurate elements: Clavius is present at one of Jesus’ post-resurrection appearances, and he joins the disciples on their journey to meet Him in Galilee—and helps them evade capture by a Roman search party. The upper room meeting is not precisely according to the Biblical account. Jesus heals a leper during one of the final meals in Galilee, an incident not mentioned in the Gospels or Acts. When Jesus departs, Acts 1:9 says “Now when He had spoken these things, while they watched, He was taken up, and a cloud received Him out of their sight.” In the movie, though, He disappears in a blaze of light and rushing wind.

Bonus: Your students of ancient Rome will appreciate the representation of Roman infantry tactics, especially the testudo or “tortoise” formation used against Jewish guerillas in the opening sequence.

The concerns above are not disqualifiers; Risen is a very good film, and as far as my understanding reaches, accurate both to Scripture and to history. I liked the warmth and humanity of the disciples as well as Clavius, and Pilate and the Sanhedrin are very believable–wrong, yet realistic in their pragmatism. Some of the scenes from Scripture like the miraculous catch in John 21, are beautifully done, and they bring the Biblical stories to vivid life.

Viewers who liked Ben Hur and The Robe will find similarities in the story of a searching skeptic who ultimately finds his Savior, and his peace. There’s no romance in the picture; it’s a rough, grimy, brutal world, dominated by men who are cunning, calculating, and tough—until you meet the men who met the resurrected Christ. “This changes everything,” exclaims a wondering disciple. Yes, it does.

Highly recommended. Risen is truly good art with a good message. May be too intense for children under 10.  Rated PG-13.

For more on how to talk to your children about media, download our workshop, Media-Proofing Your Kids.