How Do You Sort Out Conflicting Stories?

One of our webinar participants asked a simple but significant question:

When two children have an argument, how do you determine the truth when the two disagree?

What do you do when you get two different stories? 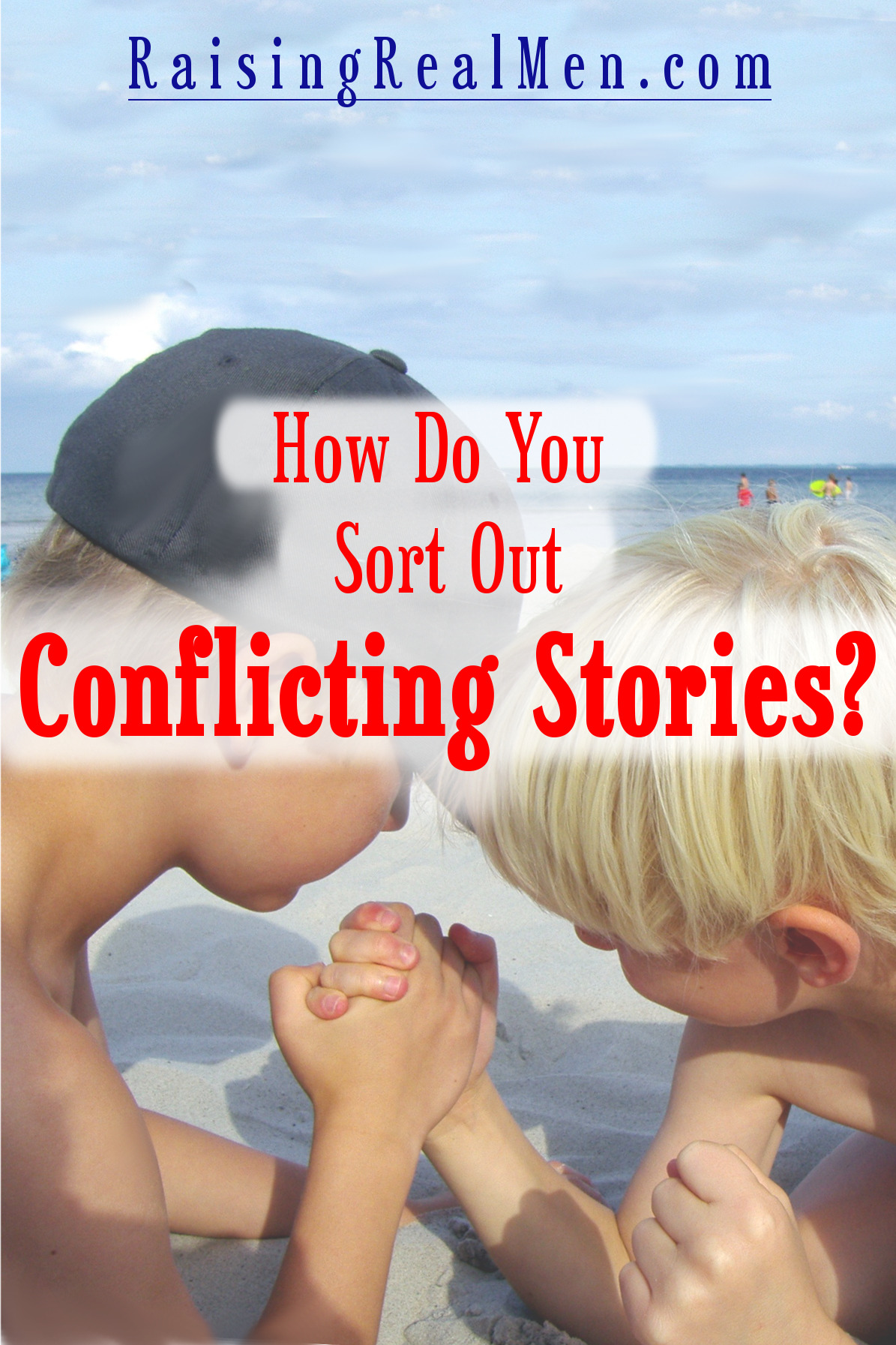 “Mama, would you please lower the boom on somebody?”

Often when the kids have a disagreement, we only find out because someone has “run to tell” – in other words, they want to call down some parental thunder on their mean old brother’s head. Usually, though, they haven’t followed Jesus’ directions about dealing with offensive people:

“… If your brother sins against you, go and tell him his fault between you and him alone. If he hears you, you have gained your brother. But if he will not hear, take with you one or two more, that ‘by the mouth of two or three witnesses every word may be established.’ And if he refuses to hear them, tell it to the church…”

“Have you talked with your brother about this first?”

“The Bible tells us when we have a problem with a brother, we’re supposed to go to him privately and try to work it out,” we might say. “Have you done that?”

So we send them back with the reminder, and commonly, that’s the last we hear of it. It’s plain the complaint wasn’t a call for justice, it was a request for an air strike against the enemy.

But if that fails …

The passage goes on to say, “Take a witness.” Sometimes, if the complaint comes back, we’ll ask, “Did anybody see or hear what happened?” If so, you can suggest they get their witness and go back to the offending party.

But on the minor stuff kids argue about, we usually skip to the last stage – which is, to go to the authority over the matter. Between believers, it’s the church; between siblings, it’s the parents. At this point, we’ll call them both in and let the offended brother tell his side of the story first, without interruption — but with the promise that you’ll listen to both sides.

When the offended brother has shared his complaint, we’ll turn to the “defendent” and ask, “You’ve heard your brother’s story. Is that basically correct? Is there anything you’d like to add or change?”

That’s an important part of it – when you demonstrate that each will have their time and their say all the way through, it says that we’re committed to justice and not just fixing the blame. Typically, we’ll have to stop both sides from jumping into the other’s narrative, too. “No, you had your say …” or “You’ll have your turn next …” This is a great place to show your fairness!

If there were any witnesses, sometimes we’ll ask for confirmation or correction.

Sometimes this is enough to demonstrate what’s going on … but frequently, a problem that’s gone to this stage has picked up a lot of secondary offenses along the way. It’s not as simple as “He’s bad, I’m innocent.” 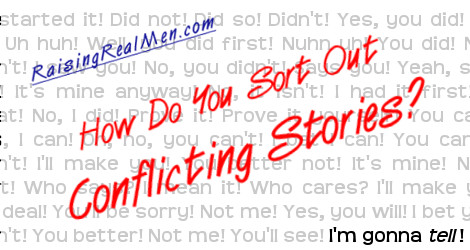 Little Brother: “He hit me!”

Dad to Big Brother: “You hit him?”

Big Brother: “Well, he threw my book down the stairs.”

Dad to Little Brother: “You threw his book down the stairs? Why?”

Dad to Big: “Did you call your brother a name?”

Big: “Well, I said he was a pest because he wouldn’t let me read …”

And — here’s the kicker — you can show them that since both of them broke rules (whether the law of God or your own family’s rules) … both of them deserve punishment. Maybe one of them needs more correction than the other – that, too, is handled in private, so neither brother really knows what discipline the other received – but in many cases, if there was ever an “innocent” party, he lost the moral high ground when he decided to be disagreeable in return.

We find that often, that realization that everyone may share some guilt encourages them to find a way to settle. And next time, there’s some memory of that possibility – that maybe we can resolve this privately, and not get the parents involved!

One of our favorite resources is Doorposts’ “The Brother Offended Checklist.”  CLICK TO FIND OUT MORE.

Like some more ideas for dealing with family friction? Check out these downloadable resources —

How To Fight So You BOTH Win – no, really! Get to the root of conflicts and find acceptable solutions – in all kinds of relationships!