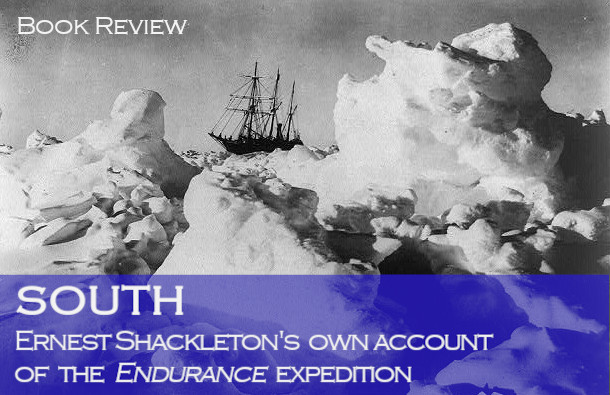 Before the space age dawned, the great frontiers for adventure and exploration were the polar regions. Sir Ernest Shackleton was part of two expeditions which set “Furthest South” records in 1902 and 1909, striving for the South Pole. After Captain Robert Scott’s death on the way back from the Pole (after discovering Roald Admundsen had reached it first), Shackleton organized a trans-polar expedition. Its goal:  to cross the Antarctic continent from one side to the other, from the Weddell Sea to the Ross Sea.

South is Sir Ernest’s account of the expedition, taken from his own logs and the journals of several men who served with him. It’s a story of incredible courage and fortitude; the expedition failed when the flagship Endurance was crushed in an ice pack and Shackleton was forced to lead his crew of 28 back to safety. Adrift on the ice for more than five months, the party took to the three open lifeboats when the ice broke up; they made it 346 miles to uninhabited Elephant Island. Shackleton then took five companions and the strongest of the boats to try and reach South Georgia, a small island visited by whaling ships. After two weeks in stormy seas, a hurricane-force gale, and 800 miles of open water, the tiny boat landed on the unsettled side of that island. Shackleton then led two men on foot across 32 miles of glacier and mountain terrain to reach help. It took four months for the rescue ship to fight back through the ice pack, but in the end all 28 men in his crew survived.

(The sister ship Aurora, intended to meet and support Shackleton from the other side of the Pole, had its own catastrophe and lost three men of its 28.)

A biographer said a generation later. “Scott for scientific method, Amundsen for speed and efficiency, but when disaster strikes and all hope is gone, get down on your knees and pray for Shackleton.”

The story is told with almost clinical detachment, but you can clearly read the lessons in the narrative. Shackleton had a deep commitment to the men as well as the mission, and he was constantly concerned over their morale and comfort. Officers and men shared alike the hardships and deprivation. You see the power of the leaders’ example and outlook, both from Shackleton and his second in command, Frank Wild, whom he left in charge of the 22 men encamped on rocky Elephant Island. Wild’s unfailing optimism kept up their hopes for four and half months when they didn’t know if the rescue party had perished or might return at any time.

In a time when we get out of sorts if our coffee’s late, it’s hard to imagine living a year on hardtack and scraps of penguin, cooked over a smoking fire of seal blubber – then climbing into a wet sleeping bag for another night in sub-zero weather. Scurvy’s not a thing in our world. But it’s good to hear the story of men who willingly took the chance of hardship, and then bore up under the trials when they came. We could all use some more Shackleton in our character!

UPDATE 3/9/22: The wreck of the Endurance has been located by marine archaeologists, 9800 feet under the Weddell Sea and four miles from the location where it sank. The lead scientist calls it “the finest wooden shipwreck I’ve ever seen” since there are no wood-destroying organisms in the frigid Antarctic waters. Check out the story and video!