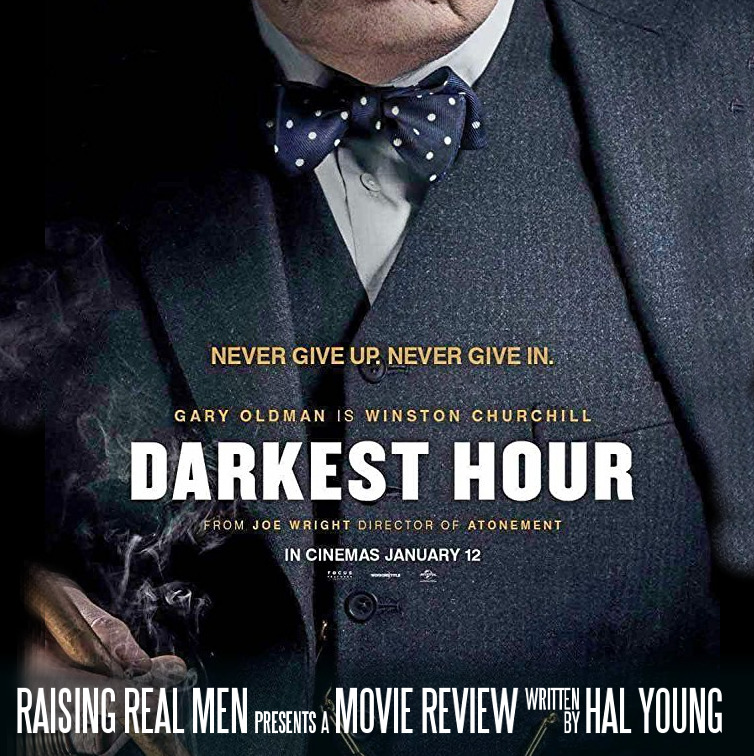 Posted by Hal in Reviews
5shares 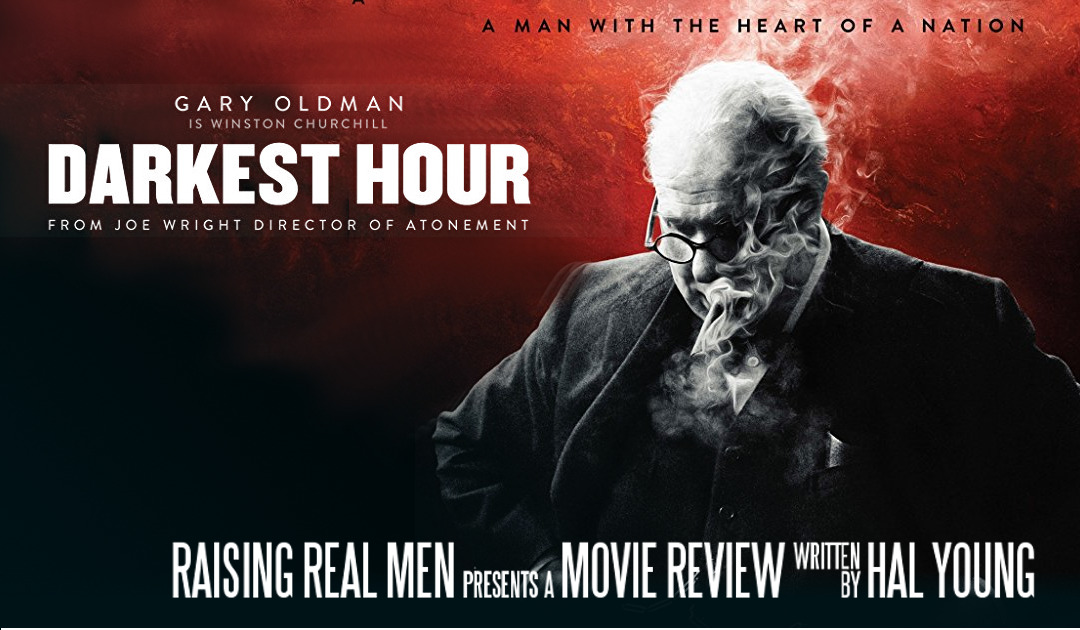 At the conclusion of the Battle of Britain, Winston Churchill said of the courageous British pilots, “This was their finest hour.” This new biographical film portrays a much darker hour, when Europe was collapsing under Nazi domination, England faced the loss of its army with invasion to follow, and King George was forced to hand the reins of government to an aging, impulsive, and widely distrusted Churchill.

Churchill is a fascinating character who offers much to admire and much to criticize. When we look back from the perspective of history, we can see how his iron determination and tenacity molded Britain’s resistance to Hitler’s expansion and kept a pathway open for the Allies to counterattack and free western Europe from the Nazis.

But Darkest Hour reminds us that in May 1940, the future was very, very dim. In short time, Hitler’s armies had swept across the map and overwhelmed everything in their path. The French were crumbling and the British army was facing annihilation, backed up against the English Channel. And the opposition parties in Parliament had completely lost confidence in the Tory prime minister, Neville Chamberlain.  His ally Lord Halifax, a diplomatic appeaser like Chamberlain, did not press a claim to succeed him, and the maverick Churchill was nominated to be the next prime minister.

Neither the King nor many in the Tory party were pleased. Churchill had been in the political wilderness for many years, incessantly warning that Hitler, not the Communists, was the next threat to British freedom. He was acknowledged as a master of the English language but derided for his temperament, his judgement, and highly unpopular positions he had taken over Ireland, India, and the abdication of King Edward.

But as Darkest Hour shows, in a tumultuous few weeks’ time, Britans began to realize they had stumbled on the man for that hour – a pudgy, balding 65-year-old with a lisp.

Critical Acclaim and Criticism, Too 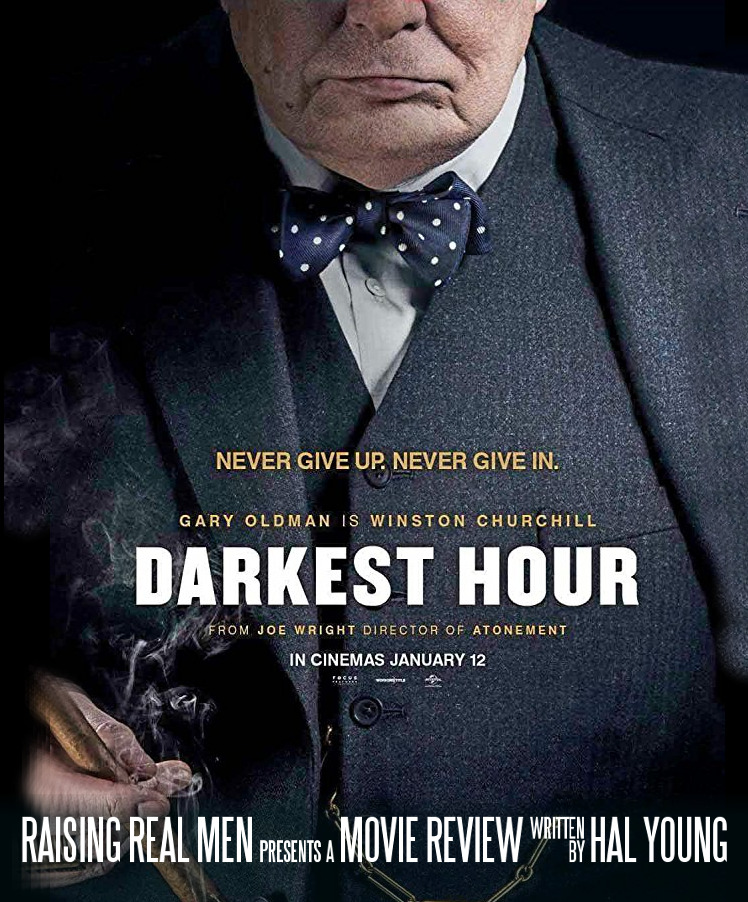 A certain amount of hype is normal for a new movie, but I’ve heard some usually-skeptical critics saying Gary Oldman’s portrayal of Churchill is a sure bet for Academy nomination. I agree. The film is beautifully produced and the pace is dramatic – a remarkable thing for a war movie that occurs almost completely indoors, within the halls of government.

Churchill is a hero to conservatives, with good reason, but heroes sometimes acquire defenders and apologists who won’t admit to their model’s weaknesses. It’s undeniable that Churchill was eccentric, self-indulgent, abrasive, and a supreme egotist. He was sometimes depressed and prone to emotional outbursts. He was not a drunkard but he was constantly drinking; Churchill’s day was a long succession of scotch-and-sodas, champagne, brandy, and port. His cigar habit was so established, the film’s producers budgeted over $24,000 for cigars alone and added a hand-wringing anti-tobacco disclaimer to the end credits.

All of this is displayed in the movie. But the film also shows the drive, the vision, and the eloquence that Churchill brought to the crisis. There is a great deal more to Churchill’s story and character than this two hour film can show, but as a fan of the historical figure, I found the movie compelling.

Several critics have complained that the movie took liberties with the history. That concerned me, so I went back to William Manchester’s huge biography, The Last Lion, and cross-checked the movie against the reality.

My conclusion – I’d say it’s 85 to 90 percent on target. Overall, Oldman’s characterization is accurate. A great deal of the dialog, even side conversations, is historically documented. The ludicrous suggestion by President Roosevelt that the British take delivery of their American-built aircraft by lugging them over the Canadian border with horses actually happened.

The young secretary who takes dictation is a composite character – Churchill had numerous secretaries at all times, not just the one – but his interaction with her is characteristic, including the weird scene where she sits outside the bathroom while the prime minister splashes and dictates correspondence from the tub.

Much complaint has been made about a  pivotal scene where Churchill rides the London Underground and draws inspiration from the spirit of the people he meets. Apparently, that is pure dramatic fiction. However, Manchester says that Churchill did attend a prayer service at Westminster Abbey about that time, and talked about the spirit and attitude of the people he met there – so the idea that he was interacting directly with the public and thinking about their opinion may be accurate in the broader sense.

Churchill’s tumultuous arrival at the center of British government demonstrates that history is not made by young, handsome men only. Unpopular choices may be the right ones. Character has many facets and different traits maybe useful at different times. Ultimately, the major theme is just the illustration of Churchill’s determination to lead Britain through its greatest crisis – even alone, even at the ultimate price – and never, never, never compromise with evil.

One recurring theme is that sacrifices “for the greater good” may be necessary but at the time, the outcome may be uncertain. When his family raises a toast on his appointment, his wife Clementine notes they have all sacrificed his attention for decades in order for him to reach this apex – an ambiguous thing to offer as a celebratory remark! Churchill orders the garrison at Calais to fight to the last man, in order to divert the German advance on the evacuating British forces at Dunkirk; though he agonizes over their certain defeat, the move does in fact buy time for the surrounded 300,000 at Dunkirk. Churchill tells Parliament and the English people to expect struggle and sacrifice, even to the point of death and destruction; this is an unanswered prospect at the end of the film.

Winston Churchill is one of those figures whose life was so long, active, and varied, it’s hard to get a general overview in a short book. The one exception I found is Paul Johnson’s Churchill. Highly recommended!

At the other extreme is William Manchester’s The Last Lion – a 3000-word, three volume monument – still worth reading! The third volume, Defender of the Realm, covers the Second World War through the end of Churchill’s life; it was co-authored by Paul Reid, who finished the book from Manchester’s notes after the historian suffered a stroke.

There are any number of shorter, more focused books on aspects of Churchill’s career. I just read and enjoyed Simon Read’s Winston Churchill Reporting, about the young Winston’s controversial beginnings as a journalist while still serving in the Army. Another interesting book is Martin Gilbert’s Churchill and America. Churchill’s mother was American, and he always had a deep admiration for the English-speaking people across the Atlantic. Gilbert’s book discusses Churchill’s crucial friendship with President Roosevelt and its impact on the war.

Darkest Hour is a packed two-hour illustration of a critical month in human history and a portrait of one of history’s most influential men in the middle of that crisis. Lavishly produced, well-written and acted, showcasing the courage of an unlikely hero in the face of total disaster.  Good Art, Good Message! Highly recommended!