When Your Boys Gang Up On Each Other

A mom with several boys asked us, “How do you handle the constant ganging-up on each other?” 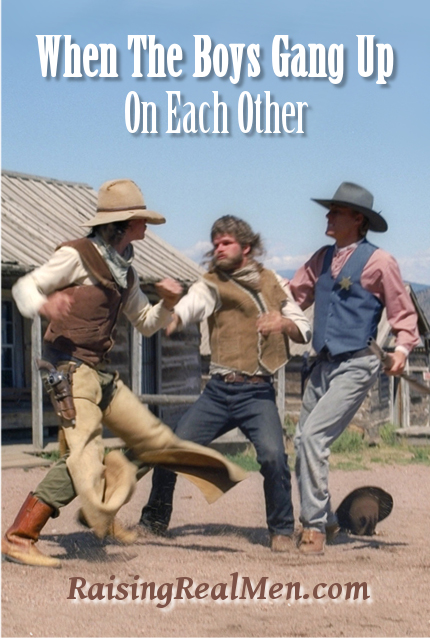 In one sense, it’s very simple – We don’t allow it!

It’s very important that your home be a haven, and that means if any kid feels persecuted, if they say “Stop it!” to their brother, whatever it is has to stop immediately – or we’re going to deal with it very sharply.

There are several things which can be going on here. There is bullying where someone is using their increased strength or position to have their will or to persecute someone smaller or younger. If someone is consistently being a bully, some physical discipline is warranted.

But then there is also what we call “pesting,” where you use your position as the smaller or weaker sibling to try to get the older person in trouble, egging them on or pestering them to a breaking point!

One of the things we do which is especially effective with the second one is to say, “If you lead your brother into sin – if you tease your brother to the point that he loses his temper and starts fighting with you …” – or from the other direction, “If you send your little brother to go steal a cookie when you’ve been told not to have one …” – then guess what? “… You are going to get the same trouble that he just earned!”

The person that provokes and the person who gets provoked, both, get punished. That really squelches it – it takes all the fun out of it!

If you have two that are just at each other’s throats, we found it really effective to make them team up. One of the things we did was take a bungee cord and hook it on their belt loops and tell them, “You two are teammates today; you can’t unhook it.” That really helped them to stop persecuting each other because they were so angry with their parents! But by the end of the day they thought it was funny … and they were dealing with their original disagreement.

What you really have to watch out for is if there is one child that is always being bullied.

Then it’s time to get alone with each of the kids that’s doing that and read them the Riot Act. Explain to them what the Scripture requires of them, that Jesus is compared to a brother (as in Proverbs 18:24, there is a friend who sticks closer than a brother) and brothers have to hang together.

“Are you the kind of brother that Jesus could use as a good example?” we ask.

And we remind them – we’ve had to do this with ours, a few times – remind them that one day, we parents are going to be dead and gone to heaven, and the only people that will remember the things of their youth, the fun we had and the things we did, will be their siblings.

We simply will not allow them to develop the kind of relationship now that destroys their future relationship as adults. We know of families where that’s happened!

Also, recognize that the Bible does have specific passages dealing with people who make fun of folks for their disabilities or their weaknesses, about people who mock one another, people who disparage one another’s character, and so on. There are passages that condemn that kind of behavior very specifically. And those are the kind of things that happen sometime when boys get a bad attitude toward each other. You’ve got to just step on that behavior. You’ve got to squash it – flat. 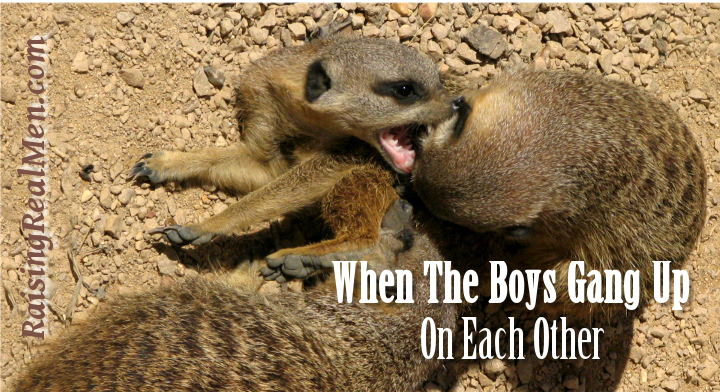 One of the things we do is encourage our guys to think of the family as a team:

We sort out our differences with one another.

We don’t pick on each other;

instead, we support one another.

We help one another along.

We handle our disagreements at home, in private – so we can stand together outside.

When there’s an ongoing problem, it tends to be the brothers who are right next to each other in age, because they’re more in competition with each other – or so they think. Competition comes very naturally to boys, and when it leaves the playing field or the game board and bleeds over into family life, it can become corrosive.

We remind our boys that a football team that starts tackling each other when the ball is snapped is never going to win.

It will be something to remind your kids over and over – they’re not in that sort of competition against their brothers. You have to explain that you do love them all now and will continue to love them all regardless.  (Note To Self: Be sure to express this often!).

Instead, our family is a team competing against the rest of the world. We’re on a mission together. That means we rejoice with our brother when he has a reason to rejoice, we grieve with him when he grieves, we stand by him when he needs us most. We can expect him to do the same for us. And we always remember:

What’s worked for your family? How do you help your kids see each other as part of a team, not as rivals?

If you haven’t read our book, Raising Real Men, then check it out here!

You might also enjoy our webinar series, Boyhood Boot Camp (for parents with young sons)

One response to “When Your Boys Gang Up On Each Other”