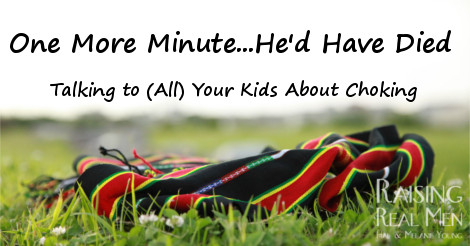 Talking to Your Kids (All of Them) About Choking

A dear sweet friend of mine nearly lost her son the other night. Just a few seconds, maybe a minute more and she’d be planning a funeral right now. Here’s her story:

I asked him repeatedly what was wrong, but he was nearing hysteria, so I got him calmed down a bit, and he was finally able to speak.

Sam said, “I was standing by John’s bed (our 12 yr old), and we were talking about the football games we’d watched today. The next thing I remember was hearing really loud buzzing, and he said I put a scarf around my neck and started choking myself. I wouldn’t stop, Mom, and look at my neck!!!!”

I looked, and y’all, his neck had really bad purple bruises on it, like bad rope burns. He was very near hysteria again, so I ran and got the younger one out of bed and brought him in my room. My hubby was in the shower, so I sat on my bed, just loving on both boys while they both just sobbed, and asked hubby to please hurry.

Hubby came out, and I managed to get the younger brother calm enough to speak, although it was extremely difficult for him. Here’s what he told us:

“Sam was standing by my bed, and we were talking about the games. There was a crocheted scarf tied onto the foot of the upper bunk, and while we were talking, he started messing with the scarf. Then he looped it over his head. When he got it over his head, he stepped down, and then he started acting really funny. I thought he was messing with me, so I turned over and faced the wall.

Sam started making noises, so I looked back at him, and he was kind of jerking around and acting weird, but I still thought he was fooling around so I told him to cut it out, and I turned back over again.

The noises got louder, and when I turned back over, his face was really purple and he was twitching and his body was like jerking and there was drool running out of his mouth. So I hollered at him, “Are you okay?? Sam?? Sam???

And then I realized that he was choking, so I jumped up out of my bed and I lifted him underneath his arms, and I held him there against my body, and I worked the scarf back over his head. Then he fell to the floor and he wouldn’t wake up. I kept trying to wake him up, and he finally opened his eyes, and he came to your room.” 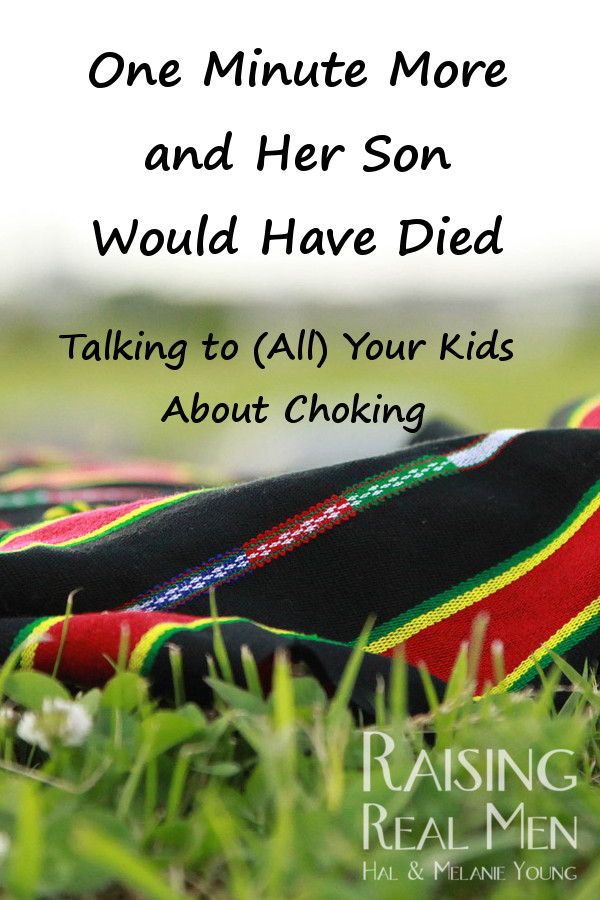 At this point, both boys were really crying hard again, but the Lord is faithful and showed me exactly what happened. Our son literally has NO MEMORY of putting that scarf over his head. But I was able to explain to him that because of the oxygen deprivation, he simply can’t remember it.

His neck looks pretty bad, and he said it hurts on the inside a lot, like a sore throat. He now remembers standing there talking to his brother, and then experiencing a loud buzzing sound, and he remembers hearing the sound of himself trying to breathe, and then he was on the floor and had no idea how he got there.

I am honestly still struggling a lot. It was so close.

We are all still quite tender from the experience, and I hope we will be for a while. I have had two children be within hours of death before, one from an asthma attack and one from dehydration due to the Rotavirus.

But this was different. And to be honest, it has scared the spit out of me. PLEASE warn your kids about playing with ropes and scarves. I thought my 14 yr old knew better, and he DID, but boys will be boys and he was just messing around.

It is never too late to remind your kids of the dangers of tying things around ANY PART of their body.

PRAISE GOD that John knew what to do for his brother, and by the way, Sam is about 4 inches taller and 30 lbs heavier than he is. John is our peanut; 12 yrs old, and about 60 lbs, and about 4’6. How he managed to lift him and hold him there is an amazing act. Adrenaline is a beautiful thing.

This was an accident, it seems, and nearly cost this young teen his life, but there are teens doing this all the time on purpose!

In the Choking Game, kids choke themselves in order to experience a high. Unfortunately, it’s very popular among Christian kids because it doesn’t involve drugs or alcohol, so they thing it must be okay (It’s NOT.). It’s highly dangerous – over 900 people have died from it, with the most common age being 12. There’s a list of victims at Games Adolescents Shouldn’t Play. We know two different families who have lost children to it. It is SO common that we think it is worth warning your kids about.

So, how do you talk about something like that? Won’t it just make them curious? If they heard about the high, but not the deaths, maybe so, but we find that talking about the kids who lost their lives pretty much cures the curiosity. That’s especially true when it’s a kid a lot like them.

“Guys, we need to talk. I was just reading about a family a lot like ours whose 14-year-old son nearly died this weekend! [Read them the story.] That was an accident, but some kids actually try to choke themselves for fun. They think it’ll make them feel good, but it could kill them! Do not EVER wrap anything tightly around your neck. Do not EVER choke yourself or someone else. It’s too dangerous. And listen, if any of your friends ever talk about doing something like this, please come tell us right away – you could save their life. Have you heard anyone talking about this?”

Just do it. Talk to them. You want them to know this is a deadly game before they hear about it from a friend.

It could save their life.

Preteens are exceptionally vulnerable to things like this because their brains are changing to prepare them for adulthood. Those brain changes make them more impulsive and more emotionally-driven. Learn more at Boot Camp 9-12, our online class for parents of preteens.