What Age Is Best For Boys To Start Sports?

We live in North Carolina, just an hour and a half from Duke, UNC, and N.C. State. If I say “March,” you say, “Madness.” It’s time for the NCAA basketball playoffs, so it’s only seasonable to mix our metaphors and kick off our “Wondering Wednesdays” with a question we received a few days ago: 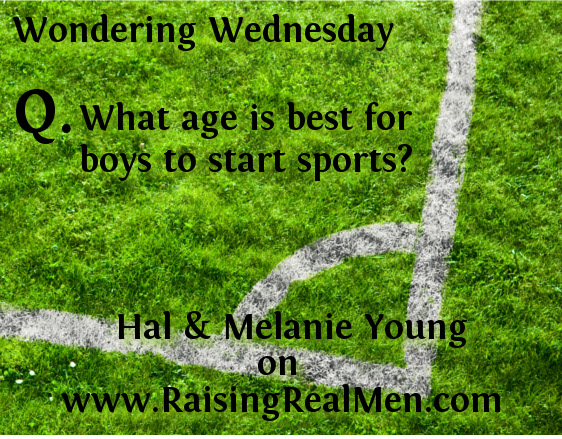 Q. What age do you recommend is best for boys to start playing a sport?

This is a question with more layers than an onion! In fact, we devoted an entire chapter of Raising Real Men to the matter of competition.

Sports and competitive games are not bad things themselves:

God uses the image of competition repeatedly as an example for us to follow or an illustration of spiritual truth. In the Christian life, we are encouraged to “run with endurance the race that is set before us.” (Hebrews 12:1)  In the life of the church, we are told to “outdo one another in showing honor.” (Romans 12:10, ESV)  The fact that some win and some don’t should not put us off; God says to use that knowledge as a spur to try harder. “Do you not know that those who run in a race all run, but one receives the prize? Run in such a way that you may obtain it.” (1 Corinthians 9:24)

Our approach to sports, like all of life, should be honoring to God:

This is balanced by God’s reminder of two factors — the need for discipline and obedience, and our dependence on Him in all things. Paul wrote to Timothy, “If anyone competes in athletics, he is not crowned unless he competes according to the rules.” (2 Timothy 2:5) To the Romans he said to keep in mind that “it is not of him who wills, nor of him who runs, but of God who shows mercy.” (Romans 9:16)

And we need to remember that not every boy is inclined to athletics–and that’s perfectly okay:

It’s normal for parents to hope their children share the things they’ve enjoyed in life, whether it’s a favorite sport, some other activity, or even a choice of college or career one day. Part of being a parent is introducing our children to things we’ve found valuable and important in life. Yet we have to remember that God makes each of us as an individual, and our differences are part of His plan (remember how He places different gifts within the church to strengthen it? See 1 Corinthians 12) We need to be careful not to try and live out our own dreams in our children’s lives when those dreams may not be God’s design for that child.

We’d suggest that it’s fine to introduce basic sports skills — running, jumping, catching and throwing — at a very early age, simply as a matter of basic physical development. We’ve seen remarkable coordination and energy in little boys who were barely out of diapers! Individual skills like bicycling and swimming, or social sports like tennis, racquetball, or golf, can be introduced whenever your son might show interest.

We’d be slow to push them into competitive, team-based sports, though. Four-year-old boys don’t need to be in soccer practice four or five hours a week, and you can tire out your whole family running back and forth to multiple practices and games, day after day after day. That becomes less of an issue when you have older teens who can drive themselves and siblings to practice, and save the family commitment to the actual games.

There’s a social aspect to be aware of, too; a lot of feelings get hurt because younger players don’t know how to be good sports yet, and those who are still learning the game can feel bullied and disrespected by more adept players who strut and boast in their success. Parents who want their younger children in team sports need to be aware of the climate of the team, the attitude of the parents and coaches as well as the parents, and make sure their sons are developing skills rather than being beaten down emotionally. This is where a dad who’s so inclined can make a big difference as a coach or assistant, not just a spectator for his sons.

So, what age is best?   We won’t give you hard and fast rules for anything where Scripture doesn’t, but we can share our experience. Our sons have enjoyed sports the most when they started at 9 or 10 or even 11 or older. Parents worry that their boys won’t be able to compete if they don’t learn early, but we’ve found a young guy old enough to have real interest himself learns a lot faster and has a much better attitude. Our guys that started at 6 or 7 or even 8, when we were ready, but they weren’t as much, don’t have nearly the love of the sport or the confidence as the ones that started later.

At different times, our boys have played soccer, baseball, basketball, and football — and we don’t really consider ourselves a sports-driven family!  Generally we’ve had a positive experience with team sports, but at every point we’ve had to keep an eye on the social interactions, protect our family’s schedule and commitments, and be sensitive to our sons’ feelings about it. We were blessed to find teams, coaches, and communities who were committed to teaching the skills, not just winning at all costs, and overall we’ve been able to keep them in balance. Competition and sports are not bad things, but they are never the most important things!

What’s been your experience?