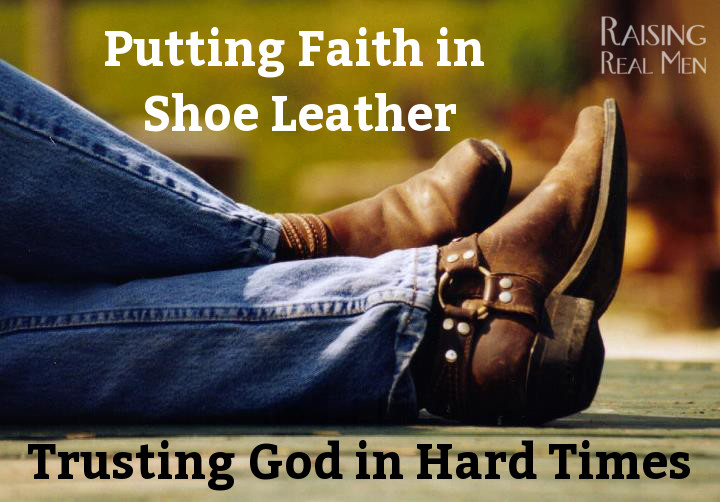 I know that God can, has, and will take care of us. I have seen the healing hand of God protecting and providing for us through every heartbeat, every breath, every moment, every day of the year. I know that God will be our strength, our fortress, our mighty rock – but do I believe it? My father fought Stage IV Hodgkin’s Lymphoma three years ago. When he was diagnosed, he had a tomato-sized tumour between his lungs, and spots of cancer in his lymph nodes, liver and spleen. The oncologists at Duke only gave Dad a 55% chance of making it until June – 6 months. Thankfully, the Lord saw fit to preserve my Father for a while yet, and Dad’s had two and a half years of clean scans. This week, though, his oncologist called with some disturbing news. He had been looking over the results from Dad’s last panel of blood tests, and they showed a higher level of a specific antibody that might indicate a return of Dad’s cancer. I’m struggling with my emotions again – I can barely stand the thought of losing my Dad. I have faith, but now it’s being tested.

My football coach often finished our team devotionals with an exhortation to put “Virtue in shoe leather”. It’s easy to talk about faith; it’s that much harder to walk in it. It’s easy to trust until we think our lives and happiness depend on it. A theologian said “We may have atheistic hearts without atheistic minds.” We can easily have a solid knowledge of something, based on experience and fact, yet still doubt that truth in our hearts. Is not that doubt evidence that we are short changing God’s power in our minds? Is it evidential of our thirst, our lustful desire for control – that we can’t stand the thought of placing our full trust in God because that equates to an admission that we can’t trust ourselves to take care of it?

Blaise Pascal, a French philosopher, once posited an idea that later became famous as “Pascal’s Wager”. Christianity seems like a collection of half-truths and fairy tales on the surface, he argued, but it makes logical sense to believe in it. After all, the Atheist has nothing to gain if he is right, and everything to lose if he’s wrong; conversely, the Christian has nothing to lose by being wrong, but everything to gain of he is right. True, merely deciding that it’s better to bet on God’s existence doesn’t foster true belief, but Pascal suggested that through that conscious decision to believe, and the constant affirmation and repetition of the idea the soul could be led to true belief. Thus, a man might become a Christian when he could have never brought himself to that point through regular paths. While I might disagree with Pascal’s stance on Salvation, I would suggest that his theory has everything to do with learning to trust God.

I think back to how I felt that spring three years ago when I thought my dad would die. My emotions swung from fear, to panic, to depression, to quiet hope. I felt like I was further lost than ever before, but somehow also closer to home. As a Christian, I knew that we had nothing to fear from death. If my father died, we would just be apart for a time, and he’d be in a far better place. For me, there’s no doubt about what will happen at the end of this mortal life – and absolutely nothing to be afraid of. It might sound selfish, but I was never afraid for my father; I was afraid for myself. I knew that whether the Lord chose to take him home at that time or not, that Dad would be okay. I was afraid that I wasn’t man enough to step into his place, to help provide for my family, or to hold my family together. I was afraid that I would be tested in fire and rather than come out purified, and tempered, that the heat and pressure would melt my resolve and destroy me. For one of the first times in my life, I really understood that I was being faced with an obstacle that I could never overcome by myself. I was a young man, barely old enough to work a part-time job, scared for the future, and overcome by doubt and fear. Yet, looking back, I see how God carried me – and my entire family – through that time. As 2 Corinthians 12:9 says, “My grace is sufficient for you, for power is perfected in weakness.” God used my weakness to show his power and complete a work of providence and healing in my father’s body and our family. During that period of stress, I learned a lot about responsibility, problem solving, and most importantly, trust.

Now, our future is once again filled with doubt and uncertainty. My dad is scheduled for a scan and appointment with his oncologist tomorrow morning. It’s been far too easy to let my overly-active imagination lead me down a depressing path of worry and fear. It’s right to be concerned, and to take all the logical steps indicated to remedy the situation – that’s why Dad’s having a scan tomorrow – but it’s wrong to let legitimate concern turn to paralyzing fear. There’s a lot of wisdom in the wartime poster the British Government created for distribution in case of a German invasion during WWII. In disaster/emergency response classes, they teach that the most important thing is to stay calm and focused, then isolate the problem, and respond appropriately – to “Keep Calm and Carry On”. So, now, when questions about my dad’s health are frantically awaiting answers, I still have a responsibility to stay focused on my duties. I know that, ultimately, the Lord will continue to provide for us, but my faithless heart still doubts. So, following Pascal’s advice, I’m repeating the assurances of Scripture that God will provide for and care for his people. As I feel alarmed or worried about what the test may show tomorrow, I find myself bringing the events of Dad’s earlier bout with cancer back to mind. I may have trouble trusting in my heart, but my doubts can be assuaged by remembering how God has taken care of me, time and time again. I have seen the healing hand of God, and I have no reason to doubt that whatever happens will be a part of His perfect will. Whatever tomorrow brings, be it life, death, or any other thing, I will trust in God. I know that there is nothing which is able to separate us from the love of God which is in Christ Jesus our Lord. I’ve probably talked long enough about doubt and uncertainty. It’s time to put faith in shoe leather.

“I have a sin of fear, that when I have spun

My last thread, I shall perish on the shore ;

But swear by Thyself, that at my death Thy Son

Shall shine as he shines now, and heretofore ;

And having done that, Thou hast done ;

~John Donne: A Hymn to God the Father

P.S. — Please pray that we would receive an accurate (and hopefully clean) report back from Dad’s scan.

UPDATE: This afternoon at Duke Dad’s oncologist told him with joy that the scan had come back with no change — there was no sign of the cancer returning! This was a special blessing because the antibody found would have indicated something very bad IF the cancer had come back. Please join us in praising God and rejoicing at His mercy today! We are inexpressibly grateful for your prayers!