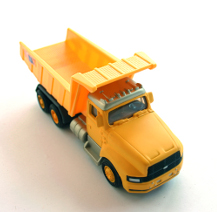 Baby, You Can Drive My Doll

Several years ago, a friend of ours decided to eliminate gender stereotypes from her children’s upbringing. When her daughter was born, Mom bought trucks and construction toys for the child to play with. When a son came along, she bought him a baby doll.

As it turned out, her kids weren’t buying it—neither one of them.

Much to Mom’s dismay, her little boy would drive the hapless doll around on its stomach making vroom-vroom sounds. His big sister, on the other hand, did pretend to drive the little trucks around the carpet, all while narrating a story of archaic domesticity: “Mommy’s putting the baby in the car seat, and they’re going to the grocery store!”

Though raised in a very up-to-date, trend-conscious family, these young children had a natural bent toward traditional gender roles. Sometimes gender “stereotypes” aren’t an evil invention of a patriarchal world but instead reflect tendencies built into us by a loving God. And we can use those tendencies—in fact, we ought to use them—to improve our homeschooling effectiveness. When you introduce a scientific principle in your home school, can you think of different ways to apply it to appeal to your children? Let’s say you want to discuss heat, the expansion of gases, and their relationship to pressure. It’s equally valid to think of the forces exerted by steam in a locomotive boiler or a pressure cooker. The physical quality of fluid viscosity works the same with motor oil or vegetable oil. Ultrasound imaging is used for both non-destructive testing of mechanical parts and non-surgical diagnosis of soft-tissue injuries. In fact, when we show our children that scientific concepts–God’s physical laws–work the same on the kitchen counter as they do at Cape Canaveral, they will grow to appreciate the wonderful consistency of His creation.

How about the stereotype that girls like to read, and boys don’t? Sadly, there is plenty of statistical evidence for this school of thought. Boys are in fact reading less and getting less benefit from it than ever before. Last year I interviewed several school and public librarians who were stocking their shelves with dozens, even hundreds, of Japanese comic books in a desperate attempt to get boys to read something. Anything. One librarian told me, “A solid quarter to third of what I circulate is graphic novels,” mostly to boys. The catalog of the public libraries of Charlotte, N.C., lists more than 600 titles of manga alone.

This is not just an American concern. The Paris-based Organisation for Economic Co-operation and Development found that in 2009 girls were, on average, a full year ahead of their male classmates in reading proficiency in every one of the sixty-five countries studied.

However, the problem may be that librarians and teachers have misjudged what is appropriate reading for boys. Sociologist Morris Massey describes schoolboys on a playground arguing about the wingspan, airspeed, and engine thrust of the different airplanes flying overhead, then dejectedly leaving recess to go string beads indoors. No teacher would assign such technically advanced information for second-graders, but the kids will eagerly dig it out for themselves if the subject grabs their attention.

We’ve seen this over and over with our six sons. If they have a personal passion for a subject, they will willingly plow into the most remarkable books. We’ve had sons who researched transcripts of Constitutional debates in our state in order to write a script for a video project. (It didn’t hurt that they won a prize for it!) Our children have acquired startling amounts of information about reptiles, fish, European military history, web design, and application programming simply because they had an interest these subjects.

Maybe instead of assigning predigested textbooks and anthologies, you can point your young learners to popular histories, biographies, and topical books from the adult section of the library—the same ones you might read to feed your own curiosity. Well-written novels like historical fiction by G. A. Henty and first-person accounts by explorers, missionaries, generals, and presidents introduce history in an engaging way (and beef up kids’ vocabulary, too). Practical manuals on subjects like carpentry, electrical wiring, or yard maintenance will provide them with hands-on application of physics, chemistry, and geometry.

We must be alert to the unique character God has built into each one of our children. Maybe Susan wants to learn biology by studying horses and wildflowers, while Robert prefers to think about dinosaurs and amoebas. Or maybe it’s the other way around. The key is to embrace the student for the unique person he or she is, not for the demographic others may think they represent.

Along with his other projects and duties, Hal is the editor of Apologia Educational Ministries’s monthly newsletter, Apologia World. This article originally appeared in the October 2011 issue.

You can subscribe to their free monthly e-newsletter here!

2 responses to “Baby, You Can Drive My Doll”