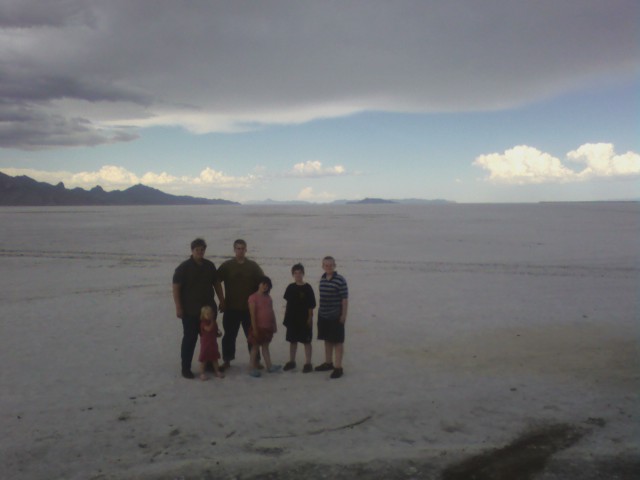 Bonne Ville means “good city” in French, but without a doubt Bonneville, Utah, is the most inhospitable, uninhabitable place I’ve ever seen, including the Arabian Desert. It was named for Benjamin Bonneville, a French-born Army officer who explored the region in the 1830s. It certainly is no place for a city, good or bad.

‘The whole land is brimstone, salt, and burning; it is not sown, nor does it bear, nor does any grass grow there, like the overthrow of Sodom and Gomorrah, Admah, and Zeboiim, which the LORD overthrew in His anger and His wrath.’

– Deuteronomy 29:23, about another place and time

We made a stop at the Bonneville Salt Flats during our recent trip west, because what young man has never heard of the land speed trials, the rocket sleds and hyperfast cars, that Bonneville is famous for? And under certain conditions – like “solid ground” and “Bureau of Land Management permit” – you can drive on the Flats. You can see where joyriders have darted off the paved road for a quick doughnut in the salt (obviously without official sanction). The boys were disappointed that I wouldn’t make the test in our 15-passenger van; I didn’t want to flout the permits, nor cake the underside with corrosive mud, nor risk getting mired in the middle of it.

Because it’s salt, all right. Picture a half inch of white table salt, slightly damp, leveled out from here to … oh, Wyoming, I guess. Definitely not a place you want to get stuck. We visited on a cloudy day, with gusty wind and spitting showers — proving that shade, a breeze, and moisture, aren’t much improvement on the sun-baked version of this forbidding place. Where we stopped, the pavement simply ends at an informational sign. You can walk out as far as you care to go … and having seen it now, I don’t suppose you’d care to go very far. If this country is like that earlier example of God’s wrath, you don’t want to go there, either.