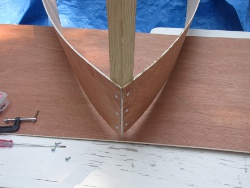 The Boat: Where Do We Start …

Posted by Hal in Projects
0shares Ever hear the phrase, “from stem to stern”?  Okay, this is the stem.

(1) Start simple. We’ve build some things before but never a boat, so we found a plan with some good instructions to see if we could learn how boats go together generally. This plan was so straightforward it only had a cutting layout, a few detail sketches, and a template–two sheets of paper.

(2) Build it with minimum practical cost. Not minimum-minimum, but minimum practical.  We used 1/4-inch plywood instead of 3/8-inch because the designer said he’d done it successfully.  I chose the color based on what mis-mixed paint we could buy on clearance at Wal-Mart – $5 a gallon instead of $29. You can use scrap lumber for a lot of it, though we bought new for most pieces.

On the other hand, we purchased the $4 polyurethane glue instead of the $2 construction adhesive, because the designer recommended the more expensive type (guaranteed water proof, not water resistant). For this first try we didn’t want to skimp on something really critical.

(3) Build it with hand tools. There are some pieces which would be easier to do with a table saw or a router, but I wanted to see if we could do this with common power tools most homeowners are likely to have.  For example, the stem is prism shaped with an angled cut at the base–thankfully, the same angle on all three faces, so I could use a circular saw and shape it out of a scrap of 2×4.  Faster on a table saw, sure, but we don’t bring the workshop on vacation. (4) Have fun and learn some things doing it! This is a great opportunity to teach several woodworking skills, and we’ve already been able to teach several of the boys how to use at least one tool they hadn’t tried before.  And we’re taking it at a relaxed pace.  The designer said he’d been able to build one of these boats from flat lumber to painted and finished boat in eight hours. We, on the other hand, are working on it a half hour at a time, when we’re done swimming or after lunch or whenever it strikes us. I have no idea how many actual hours we’re putting in but we are not putting any stress on ourselves doing it!