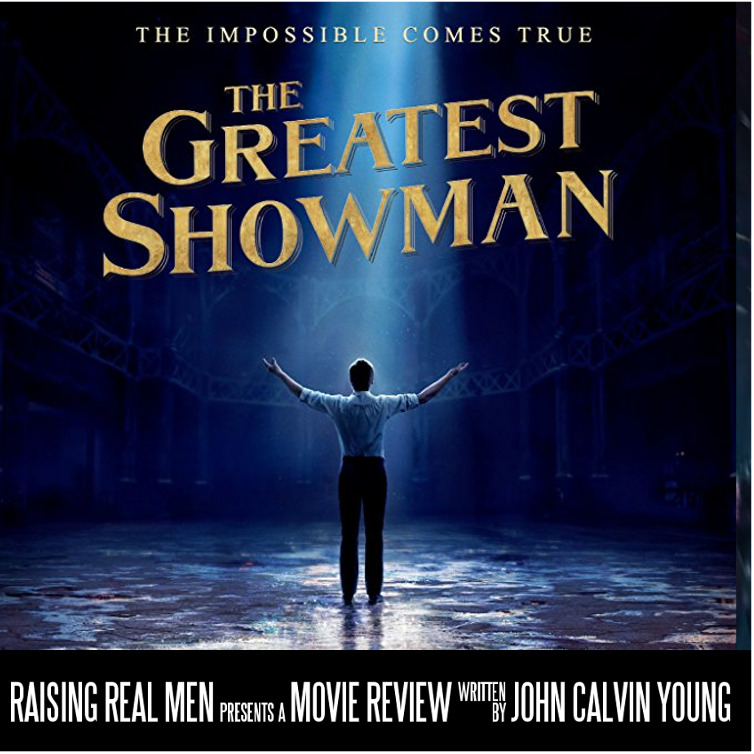 Posted by John Calvin in Reviews

Finding Respect In The Center Ring – The Greatest Showman

“Ladies and Gents, this is the moment you’ve been waiting for,” opens The Greatest Showman, a period musical piece about P.T. Barnum and the origins of his eponymous circus. Take a good breath, because this fast-paced musical spectacular won’t slow down for the next two hours, dancing and singing its way through a fictionalized retelling of P.T. Barnum’s career and revisiting the glitz and glamour that gave rise to the ‘three-ring circus’ and the Greatest Show On Earth.

The story opens with a musical romp through the center ring of the circus—with P.T. Barnum (Hugh Jackman) resplendent in red jacket & top hat, with wild animals, dancing girls, and an artist on the flying trapeze! It dissolves away into the wild imaginations of a small, grubby boy, growing up on the bleeding edge of working-class survival in the 1820s. Young P.T. doesn’t have many skills, but he can make people laugh, like his friend, Charity, the daughter of a business magnate. “Every night I lie in bed / the brightest colors fill my head / a million dreams are keeping me awake,” they sing together. Over years, their unlikely friendship turns into budding romance, and Charity (Michelle Williams) leaves her life of privilege to wed P.T. despite the young man’s inability to offer much beyond a tenement in New York.

The young couple are barely supporting themselves and their two beloved daughters when an employer’s bankruptcy throws them back on monetizing P.T.’s fertile imagination. He obtains a loan and purchases a museum of curiosities, but when tickets fail to sell, he turns to other attractions. He hires little person Charles Stratton (Sam Humphrey) to perform at his museum, making it clear that while people will come to see him, he’ll help the young man find respect and a theatrical role rather than be exhibited purely for prurient curiosity. Other outcasts and performers soon flock to join the show, and P.T.’s showmanship builds a spectacular stage show around their skills. Their ‘oddities’ may sometimes be exaggerated, and their performances carefully stage-managed, but the glib Barnum declares that his intent (aside from paying the bills) is simply to bring smiles and delight to people’s faces. The long-imagined crowds flock in, and finally P.T. Barnum’s dreams seem like they’re all coming true, with a role in the spotlight tailor-made for him, and money flooding in to provide for his long-suffering wife and daughters.

P.T.’s quest for respect doesn’t end with paying his family’s bills, however. New York society judges P.T.’s sometimes-counterfeit attractions and their consistent disapproval provides a counterpoint to the glitz and success of the center ring. The performers find a modicum of self-respect in their roles in the show, but struggle to find tolerance for their very existence in a hostile world outside of the Museum. P.T. recruits the young playwright Philip Carlyle (Zac Efron), an upper-society heir who understands showmanship instinctively but who is bound into his society’s mores and expectations. For him, joining the circus offers a path to independence and self-respect of his own, though it may lose him the respect of his family and his inheritance in the process. Barnum’s own ambition and flair for showmanship will lead him far afield, into situations that bring him world-spanning fame but may yet lose him everything he holds dear.

The Greatest Showman is very typical for a modern Broadway-style musical, in that despite the period milieu, the music and dance numbers owe more to modern pop music and theater sensibilities than the culture of the chosen time period. The pace is frenetic, as we move from spectacle to song number to dance montage throughout almost without pause. Soaring love songs and lyrical meditations like ‘Rewrite The Stars’ or ‘Tightrope’ alternate with flashy set pieces to lift the spirits, even if few of the songs stick in the mind after the visual feast of the show. The soundtrack, however, makes up for its sometimes less-than-brilliant lyricism with memorable rhythms and melodies that I’ve been humming for days. 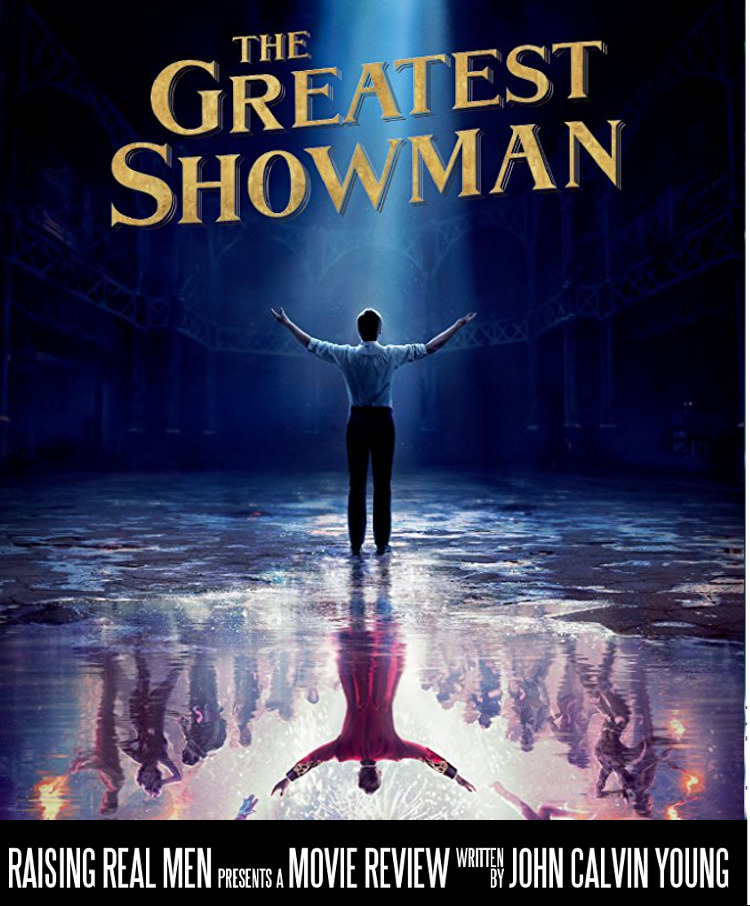 As is perhaps unsurprising in a film that celebrates the archetypes (and stereotypes) of the quintessential circus, costumes tend to range from mildly to extremely revealing, and modern theater choreography definitely adds sensual spice to many of the dance scenes. Despite this, the film does not depict or suggest immorality, and shows an unusual degree of moral backbone, presenting a married man fleeing a compromising situation he suddenly finds himself in, and also still suffering some un-earned consequences for his lack of caution. The Greatest Showman is rated at PG, not unusually for a family musical, if perhaps a bit surprising for a film about circus life. Alcohol consumption is ever-present in the film and several critical scenes take place in a bar near the Museum, even though Barnum himself became a crusading teetotaler by middle age. He also has a decidedly flexible attitude towards the truth, playing fast and loose with the facts and dipping into fraud. In his role as showman, he finds himself embellishing underwhelming curiosities and promoting hoaxes—a historical detail that is presented without comment or consequence in the film.

There is no noticeable language in The Greatest Showman, aside from some epithets and an archaic racial slur hurled at the circus performers by angry thugs. The story touches on but does not always directly address complex topics of birth defects, identity, class tensions, and racism. Carlyle falls for the circus’s trapeze artist Anne Wheeler (Zendaya), but faces severe backlash from his family and others for crossing racial and class lines for the relationship. Other hatreds are depicted: a sign held up by a protestor states “Freaks Are God’s Mistakes.” Siamese twins, a bearded woman, a little person, a hirsute “dog boy” and others are exhibited as part of Barnum’s spectacle and occasionally slighted by a careless Barnum, but they find self-respect in the roles and performances and their equality at the circus. The troupe makes the circus their home they lack elsewhere, and show more loyalty to Barnum, in the end, than he has perhaps earned.

The credits close with an unusually broad disclaimer, stating that supporting roles and situations are fictionalized for the drama and are not intended to resemble real people, living or dead. Despite the legal language, most period pieces still follow history closely. This film compresses events from over forty years of Barnum’s career into possibly five, and rearranges or rewrites the details to suit the demands of the plot. His museum was always a major part of his enterprises but he didn’t actually start his traveling circus or acquire the legendary elephants until late in life. He was not always known for tolerance—by the 1860s, he did believe ardently in the essential equality of humanity across races and cultures, but one of his early successes thirty years earlier was fraudulently exhibiting an enslaved and crippled African-American woman as George Washington’s nurse. Nevertheless, history has been largely kind to P.T. Barnum, and this film largely takes that rosy-colored view.

Spoilers ahead, skip the next paragraph if you care

Much of the later events of the film are rewritten wholesale for dramatic effect. Although his involvement with the Jenny Lind tour did end early, it was not due to her unreciprocated love, and it left him rich, rather than beggaring him. His desire to find legitimacy and respect for his attractions led him from the Lind tour to a number of other experiments and innovations in the show business, and it wasn’t until the late 1860s over fifteen years after the Lind tour that his Museum burned, and in 1870 the eponymous traveling circus was born.

The Greatest Showman explicitly encourages dreamers and visionaries to pursue their wild fantasies, and refuse to let society’s disapproval or the difficulty of their circumstances hold them back. That can be good advice, sometimes, but if that was all the film offered it’d wear very thin. Its feel-good optimism, however, is tempered with a hefty dose of setbacks and challenges to balance P.T. Barnum’s dreams. Not every decision P.T. makes turns up roses, and even he eventually has to learn some lessons of contentment the hard way. Family and marital fidelity are depicted winsomely, and ultimately Barnum’s ambition is shown in its proper context and balance.The individual arcs of each character explore how the respect of others and self-respect are not the same thing, and learn the valuable lesson that to gain the one often entails losing the other. The tough topics of racism, prejudice, and (lack of) discretion raised by the film are not always addressed satisfyingly in context, but provide largely thoughtful jumping-off places for discussion.

As a love letter to the golden age of the circus, The Greatest Showman definitely succeeds, and leaves a better taste in one’s mouth than last year’s Hollywood musical celebration of self, La La Land. It’s a fun two hours full of dance and romance, and the set pieces are spectacular. But it’s not all popcorn and pizazz. The film’s best moments are its toughest, when the spotlights fade, and the characters’ love for each other shines through. “A man learns who is there for him / when the glitter fades and the walls won’t hold […] from now on / these eyes will not be blinded by the lights.” Is it really “the greatest show”? I don’t know, but I know I’m looking forward to seeing The Greatest Showman again.